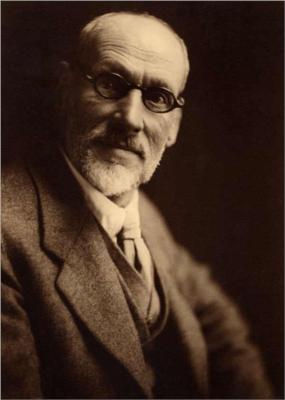 Thomas William "Tom" Roberts (8 March 1856 – 14 September 1931) was a British-born Australian artist and a key member of the Heidelberg School, also known as Australian Impressionism. After attending art schools in Melbourne, he left for Europe in 1881 to further his training, and returned home in 1885, "primed with whatever was the latest in art". He did much to promote en plein air painting and encouraged other artists to capture the national life of Australia. While he is best known for his "national narratives", among them Shearing the Rams (1890), A break away! (1891) and Bailed Up (1895), he also achieved renown as a portraitist.

Roberts was born in Dorchester, Dorset, England, although some mystery surrounds his actual birthdate: his birth certificate says 8 March 1856, whereas his tombstone is inscribed 9 March.

Roberts migrated with his family to Australia in 1869 to live with relatives. Settling in Collingwood, a suburb of Melbourne, Victoria. He worked as a photographer's assistant through the 1870s, while studying art at night under Louis Buvelot and befriending others who were to become prominent artists, notably Frederick McCubbin.

During this period, his mother had remarried to a man whom Roberts did not get on with. He hence decided to further his art studies, and returned to England for three years of full-time art study at the Royal Academy Schools from 1881 to 1884. He traveled in Spain in 1883 with Australian artist John Peter Russell, where he met Spanish artists Laureano Barrau and Ramon Casas who introduced him to the principles of Impressionism and plein air painting. While in London and Paris, he took in the progressing influence of painters Jules Bastien-Lepage and James Abbott McNeill Whistler.

Through the 1880s and 1890s Roberts worked in Victoria, in his studio at the famous studio complex of Grosvenor Chambers at 9 Collins Street, Melbourne. In 1885 he started painting and sketching excursions to outer suburbs, creating camps at Box Hill and Heidelberg, where he worked alongside McCubbin, Arthur Streeton and Charles Conder, working on representing Australia’s light, heat, space and distance.

In 1896 he married 36-year-old Elizabeth (Lillie) Williamson and they had a son, Caleb. Many of his most famous paintings come from this period. Roberts was an expert maker of picture frames, and during the period 1903–1914, when he painted relatively little, much of his income apparently came from this work. Roberts spent World War I in England assisting at a hospital. In Australia, he built a house at Kallista, near Melbourne. Elizabeth died in January 1928, and Roberts remarried, to Jean Boyes, in August 1928. He died in 1931 of cancer in Kallista near Melbourne. His ashes are buried in the churchyard at Illawarra near Longford, Tasmania.

Roberts painted a considerable number of fine oil landscapes and portraits, some painted at artist camps with his friend McCubbin. Perhaps the most famous in his time were two large paintings, Shearing the Rams, now displayed in the National Gallery of Victoria and The Big Picture, displayed in Parliament House, Canberra. The Big Picture, a depiction of the first sitting of the Parliament of Australia, was an enormous work, notable for the event depicted as well as the quality of Roberts' work.