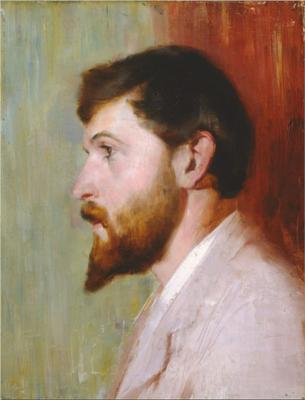 Streeton was born in Duneed, Victoria, south-west of Geelong, on 8 April 1867 the fourth child of Charles Henry and Mary (née Johnson) Streeton. His family moved to Richmond in 1874. His parents had met on the voyage from England in 1854. In 1882, Streeton commenced art studies with G. F. Folingsby at the National Gallery School.

Streeton was influenced by French Impressionism and the works of Turner. During this time he began his association with fellow artists Frederick McCubbin and Tom Roberts — at Melbourne including at Box Hill and Heidelberg. In 1885 Streeton presented his first exhibition at the Victorian Academy of Art. He found employment as an apprentice lithographer under Charles Troedel.

In the summer drought of 1888, Streeton travelled by train to the attractive agricultural and grazing suburb of Heidelberg, 11 km north-east of Melbourne's city centre. His intention was to walk the remaining distance to the site where Louis Buvelot painted his 1866 work Summer afternoon near Templestowe, which was, according to Streeton, "the first fine landscape painted in Victoria". On the return journey to Heidelberg, wet canvas in hand, Streeton met Charles Davies, brother-in-law of friend and fellow plein air painter David Davies. Charles gave him "artistic possession" of an abandoned homestead atop the summit of Mount Eagle estate, offering spectacular views across the Yarra Valley to the Dandenongs. For Streeton, Eaglemont (as it became known) was the ideal working environment—a reasonably isolated rural location that was still close to the city. The house itself could be seen by visitors as they arrived at Heidelberg railway station.

Streeton spent the first few nights at Eaglemont alone with the estate's tenant farmer Jack Whelan (who posed for Streeton's "pioneer" painting The selector's hut (Whelan on the log), 1890), and slept upon the floor, the rooms being bare of furniture. The house was "creaking and ghostly. A long dark corridor seemed full of past visions, and out of doors a blurred rich blackness against the sharp brilliance of the Southern Cross .... But tobacco and wine weighed healthily against the darkness". He descended the hill daily to Heidelberg village for meals before jaunting into the bush with a billycan of milk and swag of paints and canvases. The first artists to paint with Streeton at Eaglemont were the National Gallery students Aby Altson and John Llewelyn Jones, followed by John Mather and Walter Withers. Like Streeton, Withers painted from nature amidst suburban bush around Melbourne, employing earthy colours with loose, impressionistic brushstrokes. By the end of 1888 he became a weekend visitor to the camp.

About the same time, Streeton met the artist Charles Conder, who travelled down from Sydney in October 1888 at the invitation of Tom Roberts. One year Streeton's junior, Conder was already a committed plein airist, and was heavily influenced by the painterly techniques of expatriate impressionist Girolamo Nerli. Conder and Roberts joined Streeton at Eaglemont in January 1889 and helped make some modest improvements to the house. Despite austere living conditions, Streeton was content: "Surrounded by the loveliness of the new landscape, with heat, drought, and flies, and hard pressed for the necessaries of life, we worked hard, and were a happy trio." Streeton and Conder quickly became friends and influenced one another's art. Their shared love of South Australian poet Adam Lindsay Gordon's lyrical verse is revealed in the titles of some of their Eaglemont paintings, including Streeton's romantic gloaming work ′Above us the great grave sky′ (1890, taken from Gordon's poem "Doubtful Dreams"). Later, critics would mistake some of the pair's Eaglemont paintings as companion pieces, as both artists often painted the same views and subjects using a high-keyed "gold and blue" palette, which Streeton considered "nature's scheme of colour in Australia".