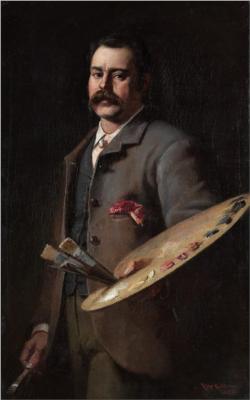 Frederick McCubbin was one of the founding members of the Heidelberg School, an art movement related to Australian Impressionism. McCubbin rose to prominence for his depictions of pioneer life that captured the aspirations and the hardships of living in the Australian bush. Paintings such as Down on his luck (1889), On the Wallaby Track (1896), and The pioneer (1904) are considered images of national significance and masterpieces of Australian art.

Frederick McCubbin was a son of a baker who immigrated to Australia in 1852. He grew up in working-class Melbourne and witnessed the city’s rapid growth and development. McCubbin trained, worked, and lived in the Melbourne area for the entirety of his life. Therefore, the area played a central role in his art, serving as the setting for many of his paintings. McCubbin began his formal training when he enrolled in evening classes at the Artisan’s School of Design in Carlton. Later, he attended the National Gallery of Victoria Art School, where he studied under Eugene von Guérard and George Folingsby. During this period, McCubbin developed essential relationships with artists Tom Roberts, Arthur Streeton, and Charles Conder. Together, they established artist’s camps at the outskirts of Melbourne, where they painted outdoors in an attempt to capture the natural environment of the bush. The artists were collectively known as the Heidelberg School because they often painted near the rural area of Heidelberg east of Melbourne.

In 1886, McCubbin was appointed as a drawing master at the National Gallery School. The same year he presented himself as a painter in Self portrait (1886), which reflected his feelings of pride and professional accomplishment. The appointment was also personally significant since the secure income allowed McCubbin to marry and stay in Australia. He got married in 1889, and over the following 17 years, the pair had seven children. In 1901, McCubbin bought a cottage at Mount Macedon that he named ‘Fountainbleau,’ an homage to the painters of the Barbizon School who painted near the forest of Fountainbleau. This area inspired McCubbin to create some of his greatest works, among them Bush Sawyers (1910) and Violet and gold (1911). In 1907, the artist traveled to Europe, where he saw many paintings that he long admired through reproductions. After his return from Europe, McCubbin developed his mature style that became more akin to Impressionism. His brushwork became looser and more expressive, as evident in paintings like Violet and gold and Collins Street (ca. 1915). In these paintings, his chief concern was depicting varying light effects during different seasons and times of the day. These later paintings were also more intimate than his earlier historical paintings that depicted pioneers in the bush. In May 1916, The art of Frederick McCubbin was one of the first significant art books published in Australia. It was a sign of his success and the recognition he received during his lifetime. A year later, on December 20th, 1917, McCubbin died of a heart attack.

McCubbin was born in Melbourne, the third of eight children of baker Alexander McCubbin (from Ayrshire, Scotland) and his English wife Anne, née McWilliams. McCubbin was educated at William Willmett's West Melbourne Common School and St Paul's School, Swanston Street. He later worked for a time as solicitor's clerk, a coach painter and in his family's bakery business while studying art at the National Gallery of Victoria's School of Design, where he met Tom Roberts and studied under Eugene von Guerard. He also studied at the Victorian Academy of the Arts and exhibited there in 1876 and again from 1879 to 1882, selling his first painting in 1880. In this period, after the death of his father, he became responsible for running the family business.

By the early 1880s, McCubbin's work began to attract considerable attention and won a number of prizes from the National Gallery, including a first prize in 1883 in their annual student exhibition. By the mid-1880s he concentrated more on painting the Australian bush, the works for which he became notable.

In 1883, McCubbin received first prize in the first annual Gallery students' exhibition, for best studies in colour and drawing. In 1888, he became instructor and master of the School of Design at the National Gallery. In this position he taught a number of students who themselves became prominent Australian artists, including Charles Conder and Arthur Streeton.

McCubbin married Annie Moriarty in March 1889. They had seven children, of whom their son Louis McCubbin became an artist and director of the Art Gallery of South Australia 1936–1950. A grandson, Charles, also became an artist.

In 1901 McCubbin and his family moved to Mount Macedon, transporting a prefabricated English style home up onto the northern slopes of the mountain which they named Fontainebleau. It was in this beautiful setting, in 1904, that he painted The Pioneer, amongst many other works, and this is the only place that McCubbin ever painted fairies. The house survived the Ash Wednesday fires and stands today as a testament to the artist. It was at Macedon that he was inspired by the surrounding bush to experiment with the light and its effects on colour in nature.

McCubbin continued to paint through the first two decades of the 20th century, though by the beginning of World War I his health began to fail. He traveled to England in 1907 and visited Tasmania, but aside from these relatively short excursions lived most of his life in Melbourne. There he taught at the National Gallery of Victoria Art School, where his students included painter Hilda Rix Nicholas and the photographer Ruth Hollick.

In 1912 he became the founding member of the Australian Art Association.

McCubbin died in 1917 from a heart attack.

"McCubbin creates an engulfing, claustrophobic landscape by barely suggesting any horizon and compressing midground and background. In contrast, the bush folk are portrayed as heroic figures."