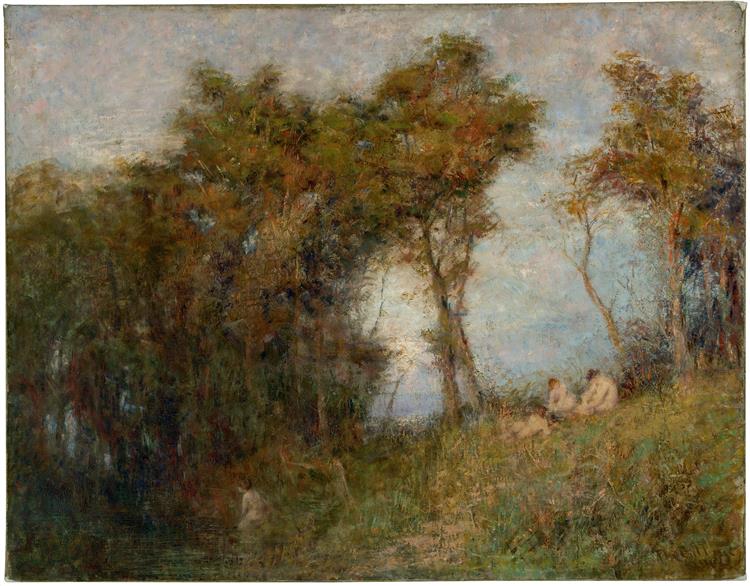 Afterglow (Summer evening) (1912) was one of the landscapes painted by Frederick McCubbin towards the end of his life. Initially exhibited in 1912 under the title Summer evening, the painting echoes traditions of European landscape painting: the glowing light is reminiscent of the dreamy landscapes by 17th-century painter Claude Lorrain, and the feathery foliage with small figures relate to 18th-century landscapes by Jean-Antoine Watteau. McCubbin, who had extensive knowledge of old masters and art history, was conscious of these painting conventions and traditions.

Most notably, Afterglow was influenced by the imagery of the Roman goddess Diana bathing with her nymphs, especially by the version of the French painter Camille Corot, The Bath of Diana (ca. 1855). Corot was a pivotal figure in the development of landscape painting and a significant influence on Impressionist painters. McCubbin had long admired Corot’s paintings through reproductions, and his scrapbooks had several black and white illustrations of Corot’s works, including The Bath of Diana. Corot’s painting shares compositional elements with Afterglow: in both cases, there are clusters of trees at the edge of the water and bathers. However, unlike Corot, McCubbin only painted one bather entering the water while the other three relax on the grass.

Additionally, an article on Corot in the magazine, The Studio, featured a black and white image of Corot’s painting Bathers of the Borromean Isles (ca. 1865-1870). McCubbin likely noticed the painting that was similar in subject matter and composition to Afterglow. Painters, like Corot, had a profound influence on McCubbin. Corot was associated with the Barbizon School, an art movement that advanced the practice of painting outdoors. McCubbin was among the prominent members of the Heidelberg School - a group of Australian painters that organized artist’s camps at the outskirts of Melbourne in the late 1880s and early 1890s. Following the model of the Barbizon School, they would pitch their tents near a creek and paint quickly, trying to capture the landscape before the light changed. In that period, McCubbin’s colleagues Charles Conder, Tom Roberts, and Arthur Streeton, all painted images of nude bathing in the bush.

The landscape in Afterglow is a specific place: Lake Strathmore on ‘Ard Chielle’, a property near McCubbin’s cottage on Mount Macedon. Even though McCubbin absorbed the influences of European painting, his landscapes celebrated the unique beauty of the Australian bush. McCubbin’s style in late paintings like Afterglow was much freer, his brushwork was looser and bolder, and he even used a broad palette knife to apply dots of color. This new approach was inspired by his first and only trip to Europe in 1907, where he closely observed works of J.M.W Turner and Claude Monet. After painting the landscape, McCubbin completed the work in his studio, where he added the female figures. These were likely painted from sketches that were drawn beforehand. As the title suggests, McCubbin wanted to direct attention to the light and its effects: how it lingers in the sky towards the end of the day and how it softly glistens on the foliage and the flesh.