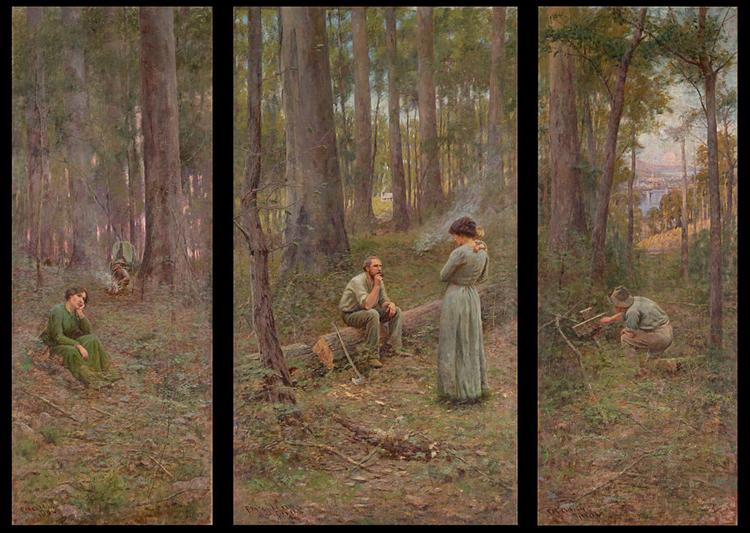 The monumental painting, The pioneer (1904) by Frederick McCubbin, is considered one of the greatest masterpieces of Australian art. The artist depicted a pioneering couple in the Australian bush and the progression of their life through three panels. By choosing to paint a triptych, a traditional format used for religious paintings, the artist elevated the status of the pioneers. The choice of subject relates to the rise of Australian nationalism in the years following the Federation of Australia in 1901 (the unification of six separate colonies to the Australian Commonwealth).

The left panel shows the pioneering couple in their new environment: the man in the background is lighting a fire while the woman sitting has a pensive look, thinking of the road ahead. In the central panel, we see the couple a few years later, the woman is holding a baby, and the man is resting on the log. There is evidence of their hard work. Most of the land has been cleared, and a small cottage is seen in the distance. In the right panel, a bushman is kneeling in front of a grave. The developed city in the background indicates that the image is in the distant future, but it remains unclear who the bushman is and to whom the tomb belongs.

The pioneer was painted in the bush near McCubbin’s cottage, which he named ‘Fontainebleau’ as a way of expressing admiration for the French Barbizon School of painting, whose members painted outdoors near the Fountainbleu forest. Like the painters of the Barbizon school, McCubbin painted outside to faithfully capture the harsh sunlight and the environment of the bush. Studies of the painting have shown how McCubbin experimented with priming techniques to achieve different effects of color and texture. The central panel of The pioneer was covered with an extra layer of lead white paint, which added luminosity and texture to the painting. It was also observed that the artist probably used a palette knife to apply dots of paint onto the surface.

In The pioneer and other paintings, McCubbin used friends and family as his models. The woman in the left and central panel was his wife, Annie McCubbin, that was about thirty-nine at the time. Accompanying her in the central panel was James Edward, a professional commercial painter that worked around Melbourne. In the left panel, Annie posed with local wood sawyer, Patrick ‘Paddy’ Watson, who was also depicted in the right panel. The baby Annie held in the central panel was Patrick Watson’s nephew, Jimmy Watson. Moreover, Patrick Watson, along with his brother James, posed for McCubbin’s painting Bush Sawyers (1910).

McCubbin first exhibited The pioneer in 1904 at the Melbourne Athenaeum. Today, it is part of the collection of the National Gallery of Victoria in Melbourne. The pioneer is considered an iconic image of national significance as it captured the origins and the aspirations of the early pioneers of Australia. At the same time, the painting has a universal quality by showing the journey and life of a family.

The Pioneer is a 1904 painting by Australian artist Frederick McCubbin. The painting is a triptych; the three panels tell a story of a free selector and his family making a life in the Australian bush. It is widely considered one of the masterpieces of Australian art.

The painting is part of the National Gallery of Victoria's Australian art collection and exhibited in the Ian Potter Centre in Federation Square in Melbourne.

The three panels of the triptych tell a story of a free selector, a farmer who has chosen some land to clear and farm, and his family. The story is ambiguous, like many of McCubbin's other works and McCubbin chose not to respond when controversy broke out over the "correct" meaning.

The left panel shows the selector and his wife settling on their selection; in the foreground the woman is deep in thought. In the centre panel, the baby in the woman's arms indicates that some time has elapsed. A cottage, the family home, can be seen in a clearing through the trees. The right panel shows a young man standing over a grave. A city is visible in the background, again indicating that time has passed. It is unclear if the young man is the baby from the centre panel or a stranger stumbling across the grave.

McCubbin painted the work en plein air near Fontainebleau — his home in Mount Macedon, northwest of Melbourne — using specially dug trenches to lower the canvas. The view is across a neighbouring property owned by William Peter McGregor, the second chairman of Broken Hill Proprietary Ltd. The cottage in the middle panel was the home of the manager of McGregor's bull stud. McCubbin's wife Annie and a local sawyer Patrick "Paddy" Watson were the models for the left panel, with Watson also the model for the youth in the right panel. The model for the centre panel was a young commercial painter, James Edward with Annie again posing as the woman. The baby was Jimmy Watson, Patrick's nephew.

A study of the materials and technique used in the painting revealed that—to add "luminosity and texture"—McCubbin covered the ground in the centre panel with a further layer of lead white; the brushmarks in the stiffer lead white can be seen through the later layers in raking light. Raking light also shows that a palette knife has been used in some places to apply paint to the surface. The painting is still displayed in its original frame; the frame may have been resurfaced.

The painting was first exhibited in a one-man show in 1904 at the Melbourne Athenaeum gallery but did not find a buyer. Walter Withers, a friend of McCubbin's, suggested that McCubbin add a view of Melbourne in the background of the right panel, which he did. The National Gallery of Victoria purchased the painting the following year for 367 pounds and 10 shillings, using funds from the Felton Bequest.

The painting has been described as "self-consciously nationalistic; proud of the prosperity of the fine city seen in the background - Its mood of quiet optimism is unqualified."