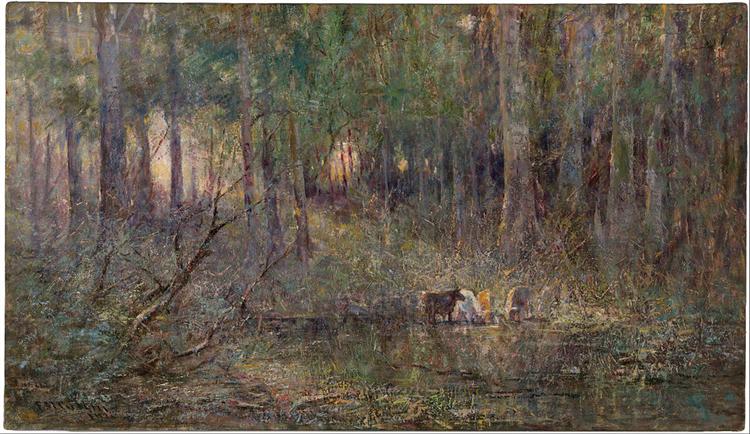 Frederick McCubbin’s Violet and Gold (1911) is representative of the artist’s mature style. While his colleagues Tom Roberts, Charles Conder, and Arthur Streeton produced their greatest works in the 1880s and 1890s, McCubbin reached his artistic peak in the early years of the 20th century. We can partially attribute it to McCubbin’s five-month trip to Europe in 1907, where he saw for the first time the paintings of J.M.W. Turner and Claude Monet. McCubbin was drawn to both of these artists because of their understanding and mastery of light and natural effects. He was particularly impressed by Turner’s late paintings that were then exhibited for the first time at the Tate Gallery in London. He wrote about Turner: he ‘realized the quality of light… no theatrical effect but mist and cloud and sea and land drenched in light. They glow with a tender brilliancy’. Turner and Monet inspired McCubbin to paint images that focused on nature and light: he explored the varying effects of different seasons and times of the day. He also began to use paint more abstractly, applying it with a palette knife and capturing the different light effects with dots of color.

In Violet and gold, the artist portrayed the atmosphere of the early day, the soft and hazy sunlight peering through the trees as it falls and reflects on the water. He created an enclosed environment dominated by dense trees and shrubbery, which allows the viewer to imagine what it is like to experience the bush from within. The painting was created near McCubbin’s cottage at Mount Macedon, on the property ‘Ard Chielle’. McCubbin, inspired by the Australian pastoral landscape, often painted this low-lying and swampy area filled with tall gum trees. He recognized the beauty in the varying effects of light and shade on the gum trees: the violet grey shadows of the stringybark and translucent sheen of the White gum subtly reflecting different tones in the light. It was precisely what McCubbin aimed to present in his painterly treatment: he painted flecks of crimson, violet, and grey that glowed in the golden and yellow light. The shimmering light, especially the small shinning orb of the sun at the center of the composition, show McCubbin’s affinity for Turner’s art, paintings such as: Going to the Ball (San Martino) (1846) and The Lake, Petworth, Sunset; Sample Study (ca. 1827-1828). Despite the influence of European art, McCubbin’s landscape is very different since it has distinct characteristics that reflect the natural setting of the Australian bush.

McCubbin chose an abstract and poetic title, Violet and gold, to emphasize his main focus on light and color. It was a rare instance in which he referenced color in the title. In other landscape paintings from the period like The coming of spring (1912) and Winter’s Morning (1914), the artist used the season or the time of day for the title. It is also possible he was inspired by a poem of American poet Stephen Crane ‘In little songs of carmine, violet, green and gold. A chorus of colors came over water’.