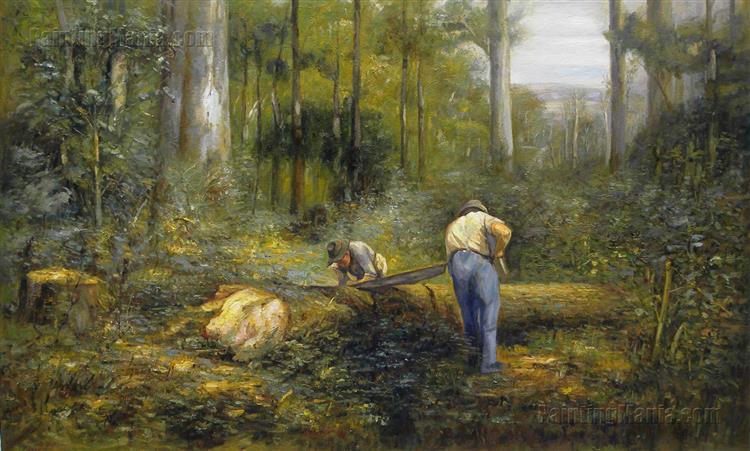 Bush Sawyers (1910) is one of several paintings by Australian painter Fredrick McCubbin that depicts the subject of wood sawyers. However, Bush Sawyers stands out for its dynamic composition: the artist captured the rhythm of the men’s labor by positioning them bent over, facing different directions while working with the two-person saw. Besides, McCubbin painted the giant tree behind the wood sawyers to create a vertical counterpoint to the horizontal movement of the saw.

In 1901, McCubbin bought a cottage outside of Melbourne on Mount Macedon. He named it ‘Fountainbleau’ as a homage to the Barbizon School: the 19th-century school of painting that made significant advances toward Realism. The art movement took its name from their gathering place, the French village of Barbizon, near the forest of Fontainebleau. In the same spirit, McCubbin painted his early portrayals of wood sawyers at ‘Fountainbleau’: The Wood Sawyer (ca. 1905) and Sawing Timber (1907). In both artworks, he depicted his eldest son Louis sawing timber in the bush. Like these early versions, Bush Sawyers was created near McCubbin’s cottage on Mount Macedon. It was a commission for the publishers of Australia Today, the journal of the Commercial Travelers Association of Victoria. The men posing in Bush Sawyers were the brothers James and Patrick ‘Paddy’ Watson.

Scholars have pointed out that McCubbin’s main inspiration for Bush Sawyers was the painting, Wood Sawyers (1850-1852), by the French painter Jean-François Millet, one of the founders of the Barbizon School. McCubbin had a postcard of the painting, and he might have seen it at the Victoria and Albert Museum when he traveled to London in 1907. Millet’s influence is evident in the pose of the wood sawyers, as well as in the color of their clothing. Both painters also covered the faces of the wood sawyers, bringing more attention to their activity and movement. Wood Sawyers proves more dynamic and engaging than McCubbin’s earlier depictions, something that can be attributed to his familiarity with Millet. Still, unlike Millet, McCubbin emphasized the setting: the wood sawyers blend into the natural environment, and there is a sense of harmony between man and nature. The wood sawyers are illuminated by soft sunlight, and the light shines through the plants creating a shimmering effect.

McCubbin was part of the Heidelberg School, an Australian art movement that was influenced by naturalist and impressionist ideas, like the practice of painting outdoors in natural light. Painters of the Heidelberg School sought to depict scenes of Australian life and landscape, making the bush a recurring subject. Other painters of the Heidelberg school depicted scenes of woodcutters in the bush: Arthur Streeton’s The selector’s hut (Whelan on the log) (1890), Tom Roberts’s Wood Splitters (1886) and Charles Conder’s Under a southern sun (Timber splitter’s camp) (1890). However, in comparison to these paintings, Bush Sawyers does not portray a story. The chief focus in the painting is the portrayal of masculine labor in the bush.