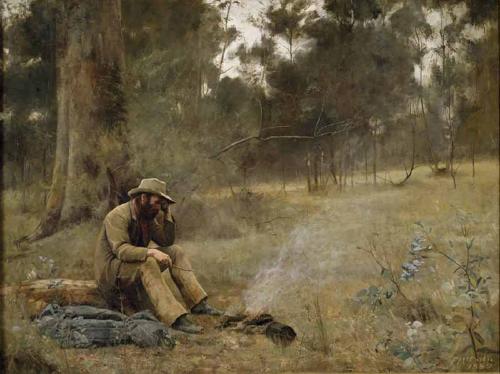 Down on his luck

Down on His Luck is an 1889 painting by the Australian artist Frederick McCubbin. It depicts a seemingly disheartened swagman, sitting by a campfire sadly brooding over his misfortune. According to an 1889 review, "The face tells of hardships, keen and blighting in their influence, but there is a nonchalant and slightly cynical expression, which proclaims the absence of all self-pity ... McCubbin's picture is thoroughly Australian in spirit." The surrounding bush is painted in subdued tones, reflecting his somber and contemplative mood.

The artist's model was Louis Abrahams, a friend and successful tobaccanist in Melbourne who earlier supplied the cigar box lids for the famous 9 by 5 Impression Exhibition. The scene was staged near the Box Hill artists' camp outside Melbourne, but it is thought that McCubbin would have made additional studies of Abrahams under studio conditions.

The painting was owned by William Fergusson up to 1986 until it was purchased by the Art Gallery of Western Australia in Perth.