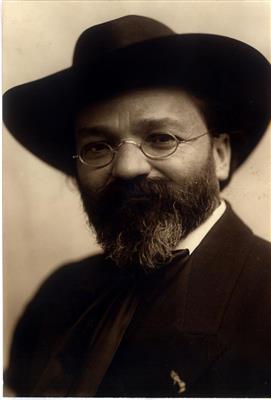 Boris Schatz (Shlomo – Zalman Dov Baruch) was born in Lithuania in 1866 to a religious family with a rabbinical lineage. With his special talents he was meant to continue the family dynasty and was sent to Vilna to study in yeshiva (Talmudic college). But Boris was quizzical and had a desire for experience, and religious studies were not suitable for him. [From the autobiography: “…as much as I tried not to think about things that cause one to sin, they still crept into my mind… from that time on I began drawing and loving human portraits, in which I find also today the most interesting material for art…”] He moved to Warsaw where he began his life as an artist and created his first sculpture “Hendel” which perpetuates the Jewish peddler.
In 1889 he married Jennie, his first wife, and together they went to Paris. Schatz studied with the sculptor Mark Antokolski, and at the same time studied painting in the Cormorn Academy. He earned a living through random jobs and also engaged in boxing and wrestling. In 1894 he sculpted his famous sculpture “Mattithyahu HaHashmonai” and started gaining recognition as an artist.
Following Prince Ferdinand inviting him to be the court sculptor of the Bulgarian Kingdom, Boris transferred his residence to Bulgaria and founded the Royal Academy of Art in Sofia. After the move to Bulgaria his marital life ended in divorce and separation from his wife Jennie and their daughter Angela. The disappointment from the dissolution of his marriage accelerated his uprooting from Bulgaria. In 1903 he met Binyamin Zeev Hertzel and presented him with the idea of founding a Talmudic college for art-crafts, that would be called “Bezalel” after Bezalel Ben Uri Ben Hur, from the tribe of Yehuda (the first artist mentioned in the bible). The decision to found this establishment was accepted in the Seventh Zionist Congress in Basil.
In 1906 Boris Schatz arrived in Israel and founded “Bezalel” which began operating with a fabrics and carpets department. Departments for silver design, brass work, wicker furniture, lithographs and others were gradually added, 30 different handicrafts in total. At a certain point such a broad variety of works were made that they could be displayed in exhibits, and a small museum could be opened in the school. This museum became the basis for the Israel Museum.
In 1909 Boris Shatz began presenting “Bezalel” exhibits all over the world for commercial and publicity purposes in order to acquire supporters and donors who would buy the schools products and in that fashion contribute to its development. The school prospered, social life and art works were created in it, as were ideas that served as a founding stone for the revival of a renewing Hebrew culture in Israel.
In 1911 he married Dr. Olga Pavzner, an art critic 15 years younger than him. A year later their first son was born, Bezalel Schatz, and four years later their daughter Zohara Schatz was born. The “Bezalel” school was closed down by the Turks for the first time during the First World War. Professor Schatz was arrested and deported, at first to Syria and then to Zephath.
With its reopening after the war the school encountered extreme economic difficulties. Boris Schatz died in 1932 in Colorado, USA while journeying to collect donations for “Bezalel”.

Boris Schatz (Hebrew: בוריס שץ‬; 23 December 1866 – 23 March 1932) was a Lithuanian Jewish artist and sculptor who settled in Palestine. Schatz, who became known as the "father of Israeli art," founded the Bezalel School in Jerusalem. After Schatz died, part of his art collection, including a famous self portrait by Dutch Master Jozef Israels, given to him by the artist, eventually became the nucleus of the Israel Museum. [1]

Boris Schatz was born in Varniai, in the Kovno Governorate of the Russian Empire (present-day Lithuania). His father, a teacher in a cheder (a religious school), sent him to study in a yeshiva in Vilnius, Lithuania. In 1883, while at the yeshiva, he enrolled at the Vilnius School of Drawing, where he was a student until June 1885. In 1887, he met the Jewish sculptor Mark Antokolsky, who was visiting his parents. He showed Antokolski a small figurine of a Jew in a prayer shawl he had carved from black stone. Antokolsky secured a stipend for Schatz and encouraged him to apply for the St. Petersburg Academy of Art, but the plan to study there did not work out. Meanwhile, he began to teach drawing privately in Vilnius. In 1888, he moved to Warsaw and taught art in Jewish schools. His first sculpture “Hendel,” created in Warsaw, is an ode to the Jewish peddler. In the summer of 1889, Schatz married Eugenia (Genia) Zhirmunsky. In 1889, Schatz moved to Paris with wife to study at the Académie Cormon. In 1890, they lived in a small French town, Banyuls-sur-Mer, for six months. At the end of 1895, they moved to Sofia, Bulgaria, where their daughter Angelika was born in 1897. Genia left him for a student of Schatz's, Andrey Nikolov, later a well-known Bulgarian sculptor, and took Angelika with her.

In March 1904, Schatz sailed to the United States to oversee the construction of the Bulgarian Pavilion at the Louisiana Purchase Exposition. He remained in the country for ten months, until the end of December 1904. Back in Sofia, he declared himself in love with 16-year-old Theodora (Dora) Gabe, later a renowned Bulgarian poet and children's author. In 1905, heartbroken when she did not return his affection, Schatz left for Berlin, where he stayed with the Zionist illustrator Ephraim Moses Lilien. Lilien introduced him to Franz Oppenheimer, a supporter of cooperative land settlement in Palestine, and Otto Warburg, later president of the World Zionist Organization. Both were enthusiastic about his idea of establishing an art school in Jerusalem. The founding of Bezalel was officially proclaimed on October 8, 1905.

In 1911, Schatz married Olga Pevzner, a writer and art history teacher. Their children Zahara Schatz (1916–1999) and Bezalel Schatz (1912–1978), nicknamed Lilik, were also artists. Angelika became a painter, too, gaining recognition in the 1930s in France and Bulgaria. For many years, it was believed the relationship ended when Genia and Boris Schatz divorced. Letters discovered in the Central Zionist Archives reveal that they remained in touch.

The 1955 Israel Prize for Art was awarded to Zahara in recognition of the whole Schatz family.