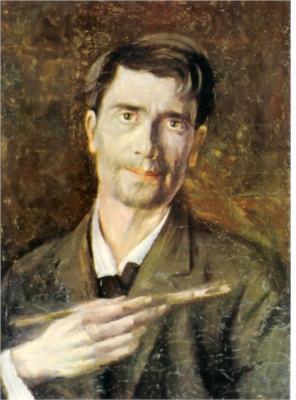 He was born in Ștefănești, a village of Botoșani County, as the son of Major Dumitru Luchian and of Elena Chiriacescu. The Luchian family moved to Bucharest in 1873 and his mother desired that he would follow his father's path and join the Military School. Instead, in 1885, Luchian joined the painting class at the Fine Arts School, where he was encouraged to pursue a career in art by Nicolae Grigorescu, whose work was to have a major effect on his entire creative life.

Starting in autumn of 1889 Luchian studied for two semesters at the Munich Fine Arts Academy, where he created copies of the works by Correggio and Rembrandt housed in the Kunstareal. After his return to Romania, he took part in the first exhibition of the Cercul Artistic art group.

He showed himself unable to accept the academic guidelines imposed by the Bavarian and Romanian schools. The following year, he left for Paris, where he studied at the Académie Julian, and, although taught by the academic artist William-Adolphe Bouguereau, became acquainted with impressionist works of art. Luchian's painting Ultima cursă de toamnă shows the influence of Édouard Manet and Edgar Degas, but also echoes of the Société des Artistes Indépendants, Modernism, and Post-impressionism (also obvious in works created after his return to Bucharest).

In 1896, together with Nicolae Vermont, Constantin Artachino, and the art collector, Alexandru Bogdan-Pitești, Stefan Luchian was one of the main founders of Bucharest's Salonul Independenţilor, which was opened in front of the official Salon (the Romanian equivalent of the Paris Salon). Two years later, the group led to the creation of Societatea Ileana and its press organ, Ileana, with Luchian as the original illustrator. From then on Luchian began integrating Symbolist elements in his work, taking inspiration from various related trends: Art Nouveau, Jugendstil and Mir iskusstva (see Symbolist movement in Romania).

In 1900, Luchian contributed two pastels to Romania's Pavilion at the World Fair, and in the same year suffered the first symptoms of multiple sclerosis, the disease which, after some initial improvements, was to haunt him for the rest of his life. Nonetheless, he continued painting and, until 1915, had his works displayed in numerous exhibitions, albeit to a largely indifferent public. At his 1905 exhibition, the only buyer of a painting was his former teacher Grigorescu. Despite being appreciated by a select few (including the writer Ion Luca Caragiale), Luchian lived in poverty (the large fortune he had inherited was progressively drained).

Paralysed from 1909, he had to live the rest of his life in an armchair. This did not prevent him from working on an entire series of landscapes and flowers. He had begun flower paintings earlier, but from 1908 he concentrated all his creative energy into the subject. Toward the end of his life, Luchian was no longer able to hold the painter's brush with his fingers, and was instead helped to tie it to his wrist in order to continue work.