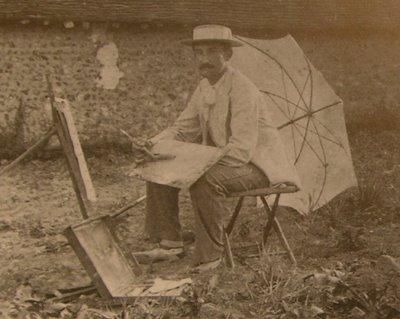 Guy Orlando Rose was born March 3, 1867, in San Gabriel, California. He was the seventh child of Leonard John Rose and Amanda Jones Rose.

His father was a prominent California senator. He and his wife raised their large family on an expansive Southern California ranch and vineyard – the San Gabriel Valley town of Rosemead bears the family name. In 1876 young Guy Rose was accidentally shot in the face during a hunting trip with his brothers. While recuperating he began to sketch and use watercolors and oil paints. He graduated from Los Angeles High School in 1884 and moved to San Francisco where he studied art between 1885 and 1888 at the School of Design with Virgil Williams, Warren E. Rollins, and the Danish-born artist Emil Carlsen. In 1886, he received honorable mentions in both drawing and oil painting; a year later he was given the school's coveted Avery Gold Medal in oil painting and contributed a still life with “excellent tone” to the Winter Annual of the San Francisco Art Association.

Rose lived in New York, New York in the 1890s and illustrated for Harper's, Scribners, and Century. Choosing to return to France in 1899, he and his wife Ethel Rose bought a cottage at Giverny. In 1900 he resided in Paris and spent the winter in Briska, Algeria where he painted three known paintings. From 1904 to 1912 husband and wife lived in Giverny and his works from this period show the influence of "the master" Claude Monet, who became his friend and mentor.

In 1913-1914 the Roses summered in and held an outdoor sketching school at Narragansett, Rhode Island. Suffering on and off again from the effects of lead poisoning, Rose and his wife moved permanently to Los Angeles, California in 1914.

Between 1918 and 1920 the Roses not only painted in Carmel-by-the-Sea, California as summer residents, they became exhibiting members of the local art colony. In 1919 they leased the Carmel cottage of artist Alice Comins. Guy’s oils appeared at the Thirteenth and Fourteenth Annual Exhibitions of the Carmel Arts and Crafts Club in 1919 and 1920. At the latter he displayed The Beach and The Point. In the fall of 1921 his two Carmel paintings at the Hotel Del Monte Art Gallery in Monterey were said to “possess the charm of the subject . . . rendered with much feeling.”