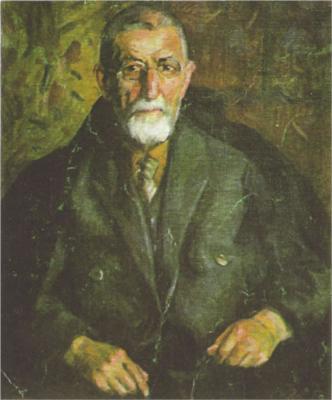 Born in Uskudar, Istanbul. Painted many landscapes of Istanbul and especially Uskudar. Attended Kuleli Military High School and then the Military Academy. There he studied under Osman Nuri Pasha, Süleyman Seyyid and Monsieur Gués, and graduated in 1884. From 1909 to 1912 he served as President of the Society of Ottoman Painters.

Hoca Ali Rıza (1858 in Üsküdar – 20 March 1930 in Üsküdar) was a Turkish painter and art teacher, known primarily for his Impressionist landscapes and architectural paintings.

His father was a cavalry major and an amateur calligrapher. After completing his basic education, he attended Kuleli Military High School, continuing to the Turkish Military Academy, where he studied art with Osman Nuri Pasha and Süleyman Seyyid. In 1881, he received an award from Sultan Abdul Hamid II. Three years later, he graduated with the rank of Lieutenant and was appointed an assistant to Nuri Pasha. He had been planning to continue his studies in Naples, but had to cancel his plans, due to a cholera epidemic there.

In 1891, he became part of a government commission examining Turkish-Islamic artifacts. Four years later, he was promoted to Kolağası (Senior Captain) and he began working as a designer at the new Imperial Porcelain Factory. He also worked with Fausto Zonaro, who was teaching painting to a local dignitary's wife at Yıldız Palace.

During the Greco-Turkish War, he was a battle painter in Ionia. In 1903, he served on a commission to create the "Türk Esliha-i Antika Müzesi" (Museum of Antiquities). Six years later, he became head of the "Military Publications Office" and served for two years. During those years, he was also chairman of the "Ottoman Painter's Association (tr)". In 1911, he retired with the rank of Yarbay (Lieutenant Colonel).

In 1914, he began teaching landscape painting at the School of Fine Arts (now the Mimar Sinan Fine Arts University). After cutbacks by the Ministry of Education, he moved to the "Çamlıca Girls' High School", where he stayed for three years, followed by time at another girls' school in Üsküdar then, in 1929, a boys' school, where he was teaching at the time of his death.

His last exhibition, organized by Celal Esat Arseven, a painter and member of Parliament, was in Paris in 1928. His work remained important in the early Republic and, even after his death, it was shown at state sponsored exhibitions. In 1933, the Ankara Halkevi featured his work in the institution's first exhibition; one of what would be sixteen solo-exhibitions, which confirmed his reputation as a master of landscape painting.