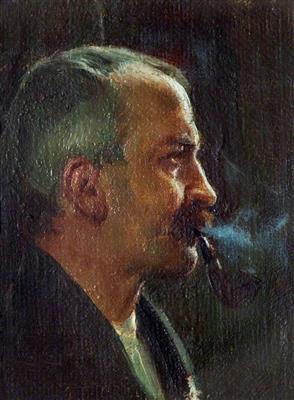 William Logsdail (25 May 1859 – 3 September 1944) was a prolific English landscape, portrait, and genre painter. He exhibited at the Royal Academy, the Royal Society of British Artists, the Grosvenor Gallery, the New Gallery (London), and others. He is notable for his realistic London and Venice scenes and his plein air style.

He was born in the Close of Lincoln Cathedral, in Lincoln, England, May 1859. He was one of seven children, six boys and one girl. His father was a verger at the cathedral. As a boy, William attended Lincoln School (now Lincoln Christ's Hospital School), and also earned money by guiding visitors up the central tower of the cathedral.

Logsdail attended the Lincoln School of Art, where he initially showed an aptitude for architecture, but with the encouragement of his art master, Edward R. Taylor, (who was also Head of the School) he took to painting. While there, he won the Gold Medal for his work in competition with students at other English art schools. He went on to study in Antwerp, at the École des Beaux-Arts, under Michel Marie Charles Verlat. While there, he became the first Englishman to win first prize at the School. One of his works from this period, The Fish Market (1880), was bought on behalf of Queen Victoria for Osborne House., When told of this, Logsdail supposedly commented, 'Shows her Majesty's good sense'.

In the autumn of 1880, Logsdail visited Venice where he was to remain, with occasional visits to England, the Balkans, Egypt and the Middle East, until 1900. During this early period in his career, he gravitated towards architectural and subject paintings. His The Piazza of St. Mark's, Venice, painted in 1883, was judged by the Royal Academy to be the 'picture of the year' when it was exhibited in London although he appears to have been dissatisfied by it, and seriously considered cutting the painting up during its composition.

He also painted some sixty-nine small paintings for the Fine Art Society on the subject of the French and Italian Riviera. Seven of these were sold to the Duke of Westminster. In 1893, Logsdail was awarded a medal for oil painting at the World's Columbian Exposition (also known as the Chicago World's Fair).

After spending two years in Taormina and Sicily, he and his family returned to England, settling in West Kensington, London, where his The Early Victorian (1906) (a costume portrait of his daughter Mary) was well received. This marked the beginning of a period of portrait painting for Logsdail, who was offered so many commissions that he was able to pick and choose his sitter at will.

In 1912, he was elected as a member of the Royal Society of Portrait Painters. As his career progressed, he turned to flower studies.

In 1892, Logsdail met May Ashman of Necton, near Swaffham in Norfolk, marrying her in the same year. He had three children with her

In 1922, he and his family moved to the Manor House at Noke, near Islip, Oxfordshire, where Logsdail remained until his death at the age 85. A plaque on the house commemorates his time there.