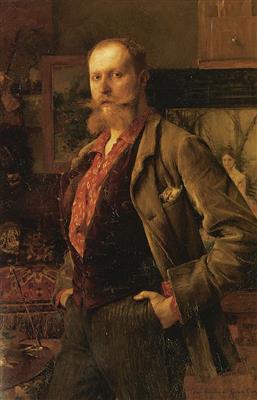 Gustave-Claude-Étienne Courtois (French: [kuʁtwa]; 18 May 1852 in Pusey, Haute-Saône – 1923 in Paris) was a French painter, a representative of the academic style of art.

Courtois was born to an unwed mother who was devoted to him. Early in life, Courtois revealed an interest in art and entered the École municipale de dessin in Vesoul (Franche-Comté).


His drawings were shown to Jean-Léon Gérôme, and in 1869, Gérôme encouraged Courtais to enter the École nationale supérieure des Beaux-Arts in Paris. Through his life, Courtois was in close friendship with fellow student Pascal Dagnan-Bouveret, together with whom he maintained a fashionable studio in Neuilly-sur-Seine from the 1880s.


His paintings can be seen in the art galleries of Besançon, Marseille, Bordeaux, and Luxembourg.
He was a Chevalier of the Legion of Honor. Among his students were Willard Dryden Paddock, Mary Rose Hill Burton, and Sara Page (1855–1943).