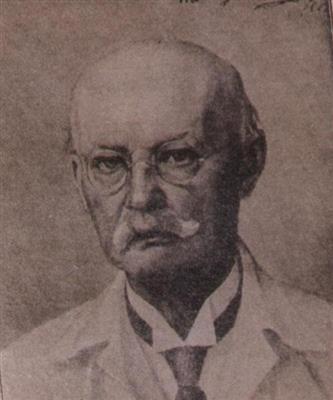 Pommeranian-born in a time when Prussian was just about to claim hegemony of the other German states and dying with one of his lasts works being a medallion of Joseph Goebbels, Ludwig Manzel is confidently an artist and a piece himself of German history. He produced many sculptures in commission for the Imperial Family, including a number of historical figures, and was good friends with Kaiser Wilhelm II. He served as professor at Kunstgewerbemuseum Berlin, one of his students being an "official sculptor" of the Third Reich Josef Thorak, and also two terms as president of the Prussian Academy of Arts. In addition to realizing his own works, Manzel was also responsible for establishing an artistic ceramics factory and bronze foundry that employed talented German sculptors to create replicas, imitations, and original pieces.

Manzel crafted, next to his historical, also allegorical pieces. They exemplify some French influence but are also evidently manifestations of "true German spirit", "e.g., strong, heroic men and women representing the ideal of a German woman, i.e. grace and strength". Indeed—intentional or not—many pieces tend to lack consistent titles as if a wink at their own abstractly allegorical nature. The strong woman figure bearing a mast atop the Manzelbrunnen, for example, may be named Allegory of the Sea, Personification of Navigation, Sedina, or rather simply Manzelbrunnen.

One may also find Manzel's caricatures and satirical illustrations in Berlin's magazines for which he drew in his early career as he could not live on a young sculptor's earnings alone.


His father was a tailor and his mother was a midwife. The family moved twice, first to Boldekow then, in 1867, to Anklam where he attended the Gymnasium. It was there that he first expressed a desire to study art, but this was not supported by his parents. In 1875, at the age of seventeen, he arrived in Berlin, penniless, with the intention of enrolling at the Prussian Academy of Arts.


He supported his education by teaching drawing at a commercial art school and providing illustrations to the magazines Ulk (Joke, or Spoof) and Lustige Blätter (The Funny Papers). Among his teachers at the Academy were Albert Wolff and Fritz Schaper. Under the aegis of a sculptor's association called "Am Wege" (On the Way), he had his first successes and obtained a one-year scholarship to Paris, where he actually remained for three years, working in a major art studio.


In 1889, he returned to Berlin, became a free-lance artist and developed a standing contract with the Imperial Family to produce busts and reliefs. His true breakthrough came in 1894, when he was commissioned to do figures for the Berlin Cathedral and the Reichstag. In 1895, he became a member of the Academy and, the following year, a Professor at the Museum of Applied Arts. In 1903, he succeeded Reinhold Begas as head of the Masters Studio, a position he held until 1925. Perhaps his best-known student was Josef Thorak, one of the "official sculptors" of the Third Reich. He served two terms as President of the Academy; from 1912 to 1915 and from 1918 to 1920. In 1914, he was one of the signatories to the Manifesto of the Ninety-Three, a document supporting Germany's invasion of Belgium.


He was a friend of both Kaiser Wilhelm II and Georg Wertheim. When the Kaiser renovated an old manor for use as a summer residence in Cadinen, he contracted with Manzel to help modernize the earthenware factory there, as well as produce new Jugendstil designs for pitchers, vases and jars. When the project was completed in 1905, the Wertheim Department Store obtained exclusive rights to sell the new products.


In his final years, he turned to painting, producing altarpieces for several churches in Charlottenburg. One of his last works was a bronze medallion of Joseph Goebbels. His grave is decorated with a female head he sculpted at an early stage of his career.