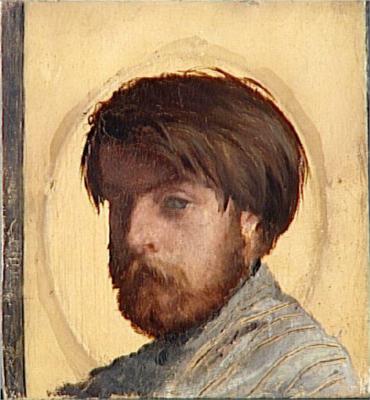 Auguste Toulmouche (September 21, 1829 – October 16, 1890) was a French painter known for his luxurious portraits of Parisian women.

Auguste Toulmouche was born in Nantes to Émile Toulmouche, a well-to-do broker, and Rose Sophie Mercier. He studied drawing and sculpture locally with the sculptor Amédée Ménard and painting with the portraitist Biron before moving to Paris in 1846 to study with the painter Charles Gleyre. He was said to be one of Gleyre's favored students, and he exhibited his first paintings at the Paris Salon in 1848 when he was just 19. He exhibited again in 1849 and 1850, by which time he has begun to specialize in portraits.

Toulmouche painted in an idealizing version of the dominant academic realist style, and his subjects were frequently Parisian women who belonged to the upper bourgeoisie. His work was popular in both France and America, and the emperor Napoleon III bought one of his portraits, La fille (The Girl), for his future empress Eugénie in 1852, with further purchases by the imperial family the following year confirming Toulmouche's status as a fashionable painter. He was generally approved by critics, winning medals at the Paris Salon in 1852 and 1861, and he was made a Chevalier of the Legion of Honor in 1870.. During his heyday, his reputation was comparable to that of artists like Alfred Stevens and Carolus-Duran. However, with their emphasis on sumptuous clothing and richly furnished domestic interiors, his paintings were also dismissed by some critics as "elegant trifles", and the writer Émile Zola referred somewhat dismissively to the "delicious dolls of Toulmouche". With the rise of Impressionism in the 1870s, his popularity suffered a decline from which it never recovered.

By his 1861 marriage to Marie Lecadre, daughter of Nantes lawyer Alphonse Henri Lecadre, Toulmouche became a cousin by marriage of the painter Claude Monet. Toulmouche sent the young Monet to study with Gleyre.

In 1870, Toulmouche joined one of the battalions defending Paris against the German invasion in the Franco-Prussian War. After the war ended, he spent more time at the Abbey of Blanche Couronne near Nantes, which was part of a large estate inherited by his wife on the death of her father. He built a workshop on the abbey grounds and invited many Parisian friends to spend time there, including Geneviève Halévy, José-Maria de Heredia, Paul Baudry, Elie Delaunay, Ernest Reyer, and the young Ignacy Jan Paderewski.

Toulmouche died suddenly in Paris following an episode of syncope, and he is buried at Montparnasse Cemetery.

Much of his work is still in private collections, but the Louvre, the Museum of Fine Arts, Boston, the Sterling and Francine Clark Art Institute, and the Musée des Beaux-Arts, Nantes, hold examples of his work.