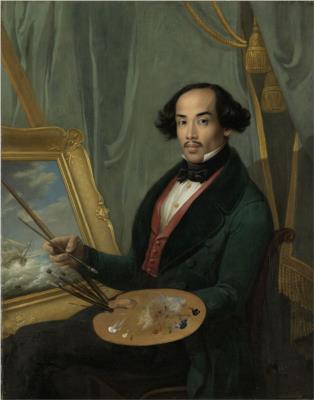 Raden Saleh Sjarif Boestaman (1811 – 23 April 1880) was a pioneering Indonesian Romantic painter of Arab-Javanese ethnicity. He was considered to be the first "modern" artist from Indonesia (then Dutch East Indies), and his paintings corresponded with nineteenth-century romanticism which was popular in Europe at the time. He also expressed his cultural roots and inventiveness in his work.

Raden Saleh Sjarif Boestaman was born in 1811 in Semarang on the island of Java in the Dutch East Indies (present-day Indonesia). He was born into a noble Hadhrami family where his father was Sayyid Husen bin Alwi bin Awal bin Yahya, an Indonesian of Arab descent. He was the grandson of Sayyid Abdullah Bustaman maternally. Raden Saleh has family connection to Habib Ali Kwitang through his sister, Roqayah, who once married to Abdurrahman (father of Ali Kwitang) but gave no offsprings.

It was from Kruseman that Raden Saleh studied his skills in portraiture, and later was accepted at various European courts where he was assigned to do portraits. While in Europe, in 1836 Saleh became the first indigenous Indonesian to be initiated into Freemasonry. From 1839, he spent five years at the court of Ernest I, Duke of Saxe-Coburg and Gotha, who became an important patron.

From Schelfhout, Raden Saleh furthered his skills as a landscape painter. Raden Saleh visited several European cities, as well as Algiers. In The Hague, a lion tamer allowed Raden Saleh to study his lion, and from that his most famous painting of animal fights was created, which subsequently brought fame to the artist. Many of his paintings were exhibited at the Rijksmuseum in Amsterdam. Several of his paintings were destroyed when the Colonial Dutch pavilion in Paris was burnt in 1931.

Raden Saleh returned to Dutch East Indies in 1852, after living in Europe for 20 years. He worked as conservator for the colonial collection of government art and continued painting portraits of the Javanese aristocracy, and many more landscape paintings. Returning to Java, he expressed his uneasiness of living in the colonies, stating that "here, people only talks about coffee and sugar, then sugar and coffee" in one of his letters.

Upon returning, Saleh built a house in Cikini (now Cikini Hospital), based on the Callenberg Castle where he had stayed during his European travels c. 1844. Surrounded by vast grounds, most of them were converted into public gardens in 1862, and were closed in the turn of the century. In 1960, the Taman Ismail Marzuki was built in the former gardens. The house itself is still used today as a hospital.

He married a young aristocratic woman of Yogyakarta Sultanate, Raden Ayu Danudirdja, in 1867 and subsequently moved to Bogor, where he rented a house near the Bogor Botanical Gardens with a view of Mount Salak. He later took his wife to travel in Europe, visiting countries such as the Netherlands, France, Germany, and Italy. His wife however contracted an illness while in Paris, the exact illness is still not known, and was so severe that they both immediately returned to Bogor. She died on 31 July 1880, following her husband's death three months earlier.