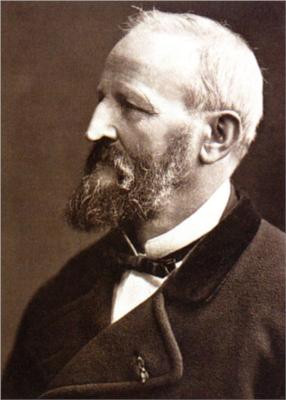 Johann Carl Bodmer (11 February 1809 – 30 October 1893) was a Swiss-French printmaker, etcher, lithographer, zinc engraver, draughtsman, painter, illustrator and hunter. Known as Karl Bodmer in literature and paintings, as a Swiss and French citizen, his name was recorded as Johann Karl Bodmer and Jean-Charles Bodmer, respectively. After 1843, likely as a result of the birth of his son Charles-Henry Barbizon, he began to sign his works K Bodmer.

Karl Bodmer was well known in Germany for his watercolours, drawings and aquatints of cities and landscapes of the Rhine, Mosel and Lahn rivers. After he moved to France following his return from an expedition in the American West, he became a member of the Barbizon School, a French landscape painting group from the mid-19th century. He created many oil paintings with animal and landscape motifs, as well as wood engravings, drawings, and book illustrations. For his work, Bodmer was made a Knight in the French Legion of Honour in 1877.

He is best known in the United States as a painter who captured the American West of the 19th century. (See collection) He painted extremely accurate works of its inhabitants and landscape. He accompanied the German explorer Prince Maximilian zu Wied-Neuwied from 1832 through 1834 on his Missouri River expedition. Bodmer was hired as an artist by Maximilian in order to accompany his expedition and record images of cities, rivers, towns and peoples they saw along the way, including the many tribes of Native Americans along the Missouri River and in that region. Bodmer had 81 aquatints made from his work to illustrate Prince Maximilian's book entitled Maximilian Prince of Wied's Travels in the Interior of North America (1839-1841 in German/published in English translation in 1843-1844).

Johann Carl Bodmer was born on 11 February 1809 in Zurich, Switzerland. When he was thirteen, his mother’s brother, Johann Jakob Meier (a prominent engraver), became Bodmer's teacher. Meier was an artist, having studied under the well-known artists Heinrich Füssli and Gabriel Lory. Young Bodmer and his older brother, Rudolf, joined their uncle on artistic travels throughout their home country.

By 1828, Bodmer had left his native Switzerland to work as a painter and engraver in the German city of Koblenz. It was there that he and his work came to the attention of Prinz Maximilian zu Wied-Neuwied. This German aristocrat had successfully led a scientific expedition to Brazil in 1815–1817. He decided to embark on another such venture, this time to North America and especially the American West. He hired Bodmer to accompany his expedition and make a visual record of the places and peoples encountered, through painting, drawings, etc. The aristocrat was known popularly to naturalists then and now as Prince Max.

After delays, Bodmer, in the company of Prince Max and David Dreidoppel, a huntsman and taxidermist, sailed for North America on 17 May 1832. In a letter of that date, Prince Max wrote to his brother that Bodmer "is a lively, very good man and companion, seems well educated, and is very pleasant and very suitable for me; I am glad I picked him. He makes no demands, and in diligence he is never lacking."