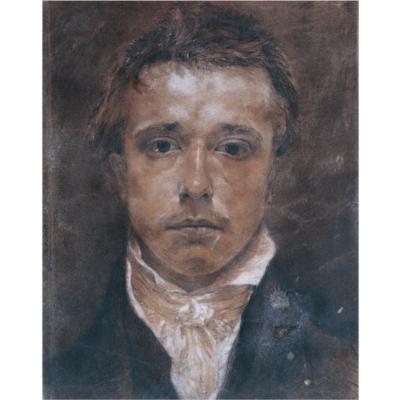 Samuel Palmer (27 January 1805 – 24 May 1881) was a British landscape painter, etcher and printmaker. He was also a prolific writer. Palmer was a key figure in Romanticism in Britain and produced visionary pastoral paintings.

Palmer, who was born in Surrey Square off the Old Kent Road in Newington, London, was the son of a bookseller and sometime Baptist minister, and was raised by a pious nurse. Palmer painted churches from around age twelve, and first exhibited Turner-inspired works at the Royal Academy at the age of fourteen. He had little formal training, and little formal schooling, although he was educated briefly at Merchant Taylors' School.

Through John Linnell, he met William Blake in 1824. Blake's influence can be seen in work he produced over the next ten years and generally reckoned to be his greatest. The works were landscapes around Shoreham, near Sevenoaks in the west of Kent. He purchased a run-down cottage, nicknamed "Rat Abbey", and lived there from 1826 to 1835, depicting the area as a demi-paradise, mysterious and visionary, often shown in sepia shades under moon and star light. There Palmer associated with a group of Blake-influenced artists known as the Ancients (including George Richmond and Edward Calvert). They were among the few who saw the Shoreham paintings as, resulting from attacks by critics in 1825, he opened his early portfolios only to selected friends.

Palmer's somewhat disreputable father – Samuel Palmer senior – moved to the area, his brother Nathaniel having offered him an allowance that would "make him a gentleman" and restore the good name of the family. Samuel Palmer senior rented half of the Queen Anne-era 'Waterhouse' which still stands by the River Darent at Shoreham and is now known as the 'Water House'. Palmer's nurse, Mary Ward, and his other son William joined him there. The Waterhouse was used to accommodate overflow guests from "Rat Abbey". In 1828 Samuel Palmer left "Rat Abbey" to join his father at Water House and lived there for the rest of his time in Shoreham. While at Shoreham he fell in love with the fourteen-year-old Hannah Linnell, whom he later married.

After returning to London in 1835, and using a small legacy to purchase a house in Marylebone, Palmer produced less mystical and more conventional work. Part of his reason in returning to London was to sell his work and earn money from private teaching. He had better health on his return to London, and was by then married to Hannah, daughter of the painter John Linnell who he had known since she was a child, and married when she was nineteen and he was thirty-two. He sketched in Devonshire and Wales around this time. His peaceful vision of rural England had been disillusioned by the violent rural discontent of the early 1830s. His small financial legacy was running out and he decided to produce work more in line with public taste if he was to earn an income for himself and his wife. He was following the advice of his father-in-law. Linnell, who had earlier shown remarkable understanding of the uniqueness of William Blake's genius, was not as generous with his son-in-law, towards whom his attitude was authoritarian and often harsh.