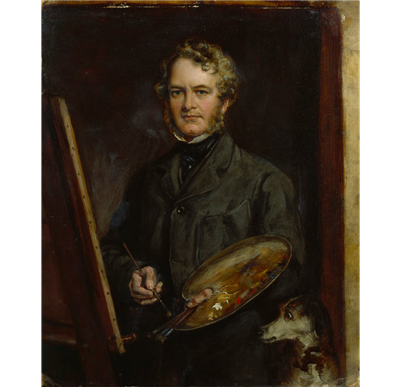 Sir Edwin Henry Landseer RA (7 March 1802 – 1 October 1873) was an English painter and sculptor, well known for his paintings of animals — particularly horses, dogs, and stags. However, his best known works are the lion sculptures in Trafalgar Square.

Landseer was born in London, the son of the engraver John Landseer A.R.A. He was something of a prodigy whose artistic talents were recognised early on. He studied under several artists, including his father, and the history painter Benjamin Robert Haydon, who encouraged the young Landseer to perform dissections in order to fully understand animal musculature and skeletal structure. Landseer's life was entwined with the Royal Academy. At the age of just 13, in 1815, he exhibited works there. He was elected an Associate at the age of 24, and an Academician five years later in 1831. He was knighted in 1850, and although elected President in 1866 he declined the invitation.

In his late 30s Landseer suffered what is now believed to be a substantial nervous breakdown, and for the rest of his life was troubled by recurring bouts of melancholy, hypochondria, and depression, often aggravated by alcohol and drug use. In the last few years of his life Landseer's mental stability was problematic, and at the request of his family he was declared insane in July 1872.

Landseer was a notable figure in 19th-century British art, and his works can be found in Tate Britain, the Victoria and Albert Museum, Kenwood House and the Wallace Collection in London. He also collaborated with fellow painter Frederick Richard Lee.

Landseer's popularity in Victorian Britain was considerable, and his reputation as an animal painter was unrivalled. Much of his fame—and his income—was generated by the publication of engravings of his work, many of them by his brother Thomas.

One of his earliest paintings is credited as the origin of the myth that St. Bernard rescue dogs in the Alps carry a small casket of brandy on their collars. Alpine Mastiffs Reanimating a Distressed Traveler (1820) shows two of the dogs standing over a man who is partially buried in snow. One is barking to attract attention while the other, who is depicted with the miniature barrel, attempts to revive the man by licking his hand.

His appeal crossed class boundaries: reproductions of his works were common in middle-class homes, while he was also popular with the aristocracy. Queen Victoria commissioned numerous pictures from the artist. Initially asked to paint various royal pets, he then moved on to portraits of ghillies and gamekeepers, Then, in the year before her marriage, the queen commissioned a portrait of herself, as a present for Prince Albert. He taught both Victoria and Albert to etch, and made portraits of Victoria's children as babies, usually in the company of a dog. He also made two portraits of Victoria and Albert dressed for costume balls, at which he was a guest himself. One of his last paintings was a life-size equestrian portrait of the Queen, shown at the Royal Academy in 1873, made from earlier sketches.