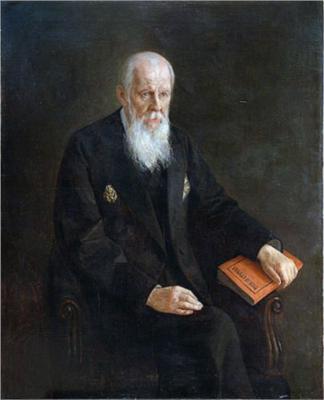 Fedor Grigoryevich Solntsev (Russian: Фёдор Григорьевич Солнцев) (14 April 1801 – 3 March 1892) was a Russian painter and historian of art. His artwork was a major contribution in recording and preserving medieval Russian culture, which was a common subject of his paintings. He was the main author of the fundamental work Antiquities of the Russian State (ru), the main decorator of interiors of the Grand Kremlin Palace in Moscow. He discovered and restored mosaics and frescoes of Saint Sophia's Cathedral and Cathedral of the Dormition of Kiev Pechersk Lavra in Kiev, and of Cathedral of Saint Demetrius in Vladimir.

Fedor Solntsev was born in Verkhne-Nikulskoye (ru) a village near Rybinsk in the Yaroslavl Governorate. His parents were serfs of Count Ivan Alekseyevich Musin-Pushkin (ru). His father, Grigory Konstantinovich Solntsev, worked as a box-office attendant for the Imperial theaters in Saint Petersburg and travelled to the village very infrequently while his mother, Elizaveta Frolovna Solntseva, was a peasant and lived all her life in the village. Fedor spent his early life with his mother and siblings. After discovering his artistic ability, his master freed the Solntsev family, which allowed Fedor to enter the Imperial Academy of Arts in Saint Petersburg in 1815 and became a pupil of Alexei Yegorov and Stepan Shchukin. Later, Fedor's younger brother, Yegor Solntsev also graduated from the Imperial Academy of Art and became a notable painter.

Fedor Solntsev's work was supported by the President of Imperial Academy of Arts Alexey Olenin and Emperor Nicholas I. The Emperor commissioned Solntsev to decorate dinner parties and embellish his private apartments in the Kremlin. Through his life Solntsev worked on restoration of many Moscow Kremlin buildings including the Grand Kremlin Palace and Kremlin Armoury. He painted Cathedral of Christ the Saviour and other churches in Moscow. Solntsev also worked in Kiev with restoration and describing artefacts of Kiev Pechersk Lavra. He painted the interiors of the Krestovozdvizhenskaya Church (ru) there.

Olenin commissioned Solntsev to describe archaeological and historical artifacts of Russian state. Solntsev started to work in 1830. He made more than 3000 highly detailed drawing of different artifacts including the record of all the Kremlin's riches. Seven hundreds of those drawings made the core for the six-volume publications titled Antiquities of the Russian State. The encyclopedia was published after Olenin's death using the funds provided by Nicholas I. Solntsev also provided a detailed chronicle of Old Russian style in his book Clothing of Russia.

Solntsev died on 3 March 1892 and was buried in Volkovo Cemetery in Saint Petersburg.