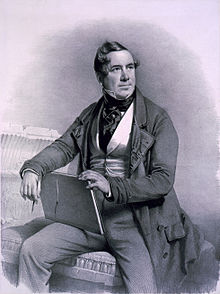 David Roberts RA (24 October 1796 – 25 November 1864) was a Scottish painter. He is especially known for a prolific series of detailed lithograph prints of Egypt and the Near East that he produced from sketches he made during long tours of the region (1838–1840). These and his large oil paintings of similar subjects made him a prominent Orientalist painter. He was elected as a Royal Academician in 1841.

David Roberts was born at Duncan's Land (now 8 Gloucester Street), Stockbridge near Edinburgh, the son of John Roberts, a shoemaker, and Christian Richie.

At the age of 10, he was apprenticed for seven years to a house painter and decorator named Gavin Beugo, his fellow apprentice being David Ramsay Hay, who became a lifelong friend. During this time he studied art in the evenings. After his apprenticeship was complete, Roberts's first paid job came in the summer 1815, when he moved to Perth to serve as foreman for the redecoration of Scone Palace. Roberts returned in the spring of 1816 and lived with his parents while looking for work.

His next job was to paint scenery for James Bannister's circus on North College Street. This was the beginning of his career as a painter and designer of stage scenery. Bannister liked Roberts's set designs and on 10 April 1816 engaged him at a salary of 25 shillings per week to travel with the circus on a tour or England. Roberts departed Edinburgh with the circus later the same month and travelled to Carlisle, Newcastle, Hull and York, returning to Edinburgh in January 1817. During his time with the circus, Roberts was called on to take several minor stage roles as a foil for the clowns' skits.

For the first few months of 1817, Roberts worked as the stage designer's assistant at the Pantheon Theatre, Edinburgh, a new joint venture between Bannister and an Italian musician named Corri. However the Pantheon was a financial failure and closed in May 1817, putting Roberts out of work. He reluctantly returned to house painting, working on the mansion house of Abercairny, near Perth, designed by Gillespie Graham. Although he was working from 5 a.m. to 7 p.m. he took the opportunity to sketch in the woods around the mansion in the evening. He followed this up with a stint painting imitation wood and marble at a mansion at Condie, near Bridge of Earn, in Perthshire. At the urging of his parents, Roberts returned to Edinburgh in January 1818, where he took employment with John Jackson, a decorative painter. Working for Jackson during 1818, Roberts decorated Lord Lauderdale's Dunbar House (known later as Lauderdale House) and then the library of Craigcrook Castle for Lord Jeffrey, who had recently leased the property.

In 1818, the Pantheon Theatre reopened in Edinburgh. Initially, a company from London with their own scene painters was in residence, but after they left, Roberts was able to get work from Corri as a scene painter. While Corri offered Roberts the position on 25 July 1818, he was already committed to house-painting work for Jackson and was unable to start at the Pantheon until the winter season. As there was no separate painting room, Roberts had to paint sets directly on the stage, which was occupied by rehearsals during the day and performances in the evening. Therefore, Roberts generally began work after the evening production had finished, working through the night. Roberts's work was noticed by the stage-manager, Mr. Monro. After the Pantheon closed, Monro moved on to the Theatre Royal, Glasgow, where he arranged for Roberts to be hired as a principal scene-painter.