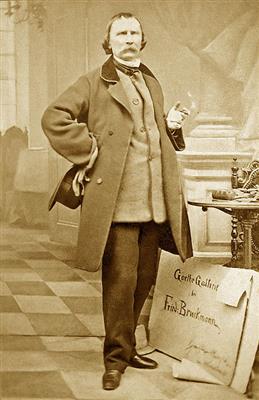 Wilhelm von Kaulbach (15 October 1805 in Bad Arolsen, Waldeck – 7 April 1874) was a German painter, noted mainly as a muralist, but also as a book illustrator. His murals decorate buildings in Munich. He is associated with the Düsseldorf school of painting.

His father combined painting and engraving with the goldsmith's trade. The family was so poor that he and his sister were glad to accept even stale bread from the peasantry in exchange for the father's engravings. This is said to have suggested to him his earliest work, The Fall of Manna in the Wilderness". But means were found to place Wilhelm, a youth of seventeen, in the Düsseldorf Academy of Fine Arts, to which the sculptor Rauch had obtained him admission. The academy was then becoming renowned under the directorship of Peter von Cornelius, of whom he became a distinguished pupil. Young Kaulbach contended against hardships, even hunger. But his courage never failed; and, uniting genius with industry, he was soon foremost among the young national party which sought to revive the arts of Germany.

The ambitious work by which Ludwig I of Bavaria sought to transform Munich into a German Athens afforded the young painter an appropriate sphere. Cornelius had been commissioned to execute the enormous frescoes in the Glyptothek, and his custom was in the winters, with the aid of Kaulbach and others, to complete the cartoons at Düsseldorf, and in the summers, accompanied by his best pupils, to carry out the designs in colour on the museum walls in Munich. In 1824 Cornelius became director of the Munich Academy of Fine Arts. Kaulbach, not yet twenty, followed, took up his permanent residence in Munich, worked hard on the public works, executed independent commissions, and in 1849, when Cornelius left for Berlin, succeeded to the directorship of the academy, an office which he held till his death.

Kaulbach matured, after the example of the masters of the Middle Ages, the practice of mural or monumental decoration; he once more conjoined painting with architecture, and displayed a creative fertility and readiness of resource scarcely found since the era of Raphael and Michelangelo. Under the direction of Cornelius, he designed (1825–8) many frescoes for the new buildings at Munich, including “Apollo and the Muses", for the ceiling of the Odeon; designs from Klopstock's Battle of Hermann", and from Goethe's and Wieland's poems, for the royal palace; purely classical illustrations of the story of Amor and Psyche, for the palace of Duke Max; and many allegorical figures for the arcades of the palace garden.

Early in the series of his multitudinous works came the famous Narrenhaus, the appalling memories of a certain madhouse near Düsseldorf; the composition all the more deserves mention for points of contact with Hogarth. Somewhat to the same category belong the illustrations to Reineke Fuchs. After Narrenhaus, his next great work, the Battle of the Huns, or Spectre Battle, representing the legend of the continued combat in mid-air between the spirits of the Huns and of Romans who had fallen before the walls of Rome, exhibited on the largest scale his talent for the symbolical and allegorical. Count Raczynski commissioned him to paint the work in sepia, and he finished it in 1837. The king of Saxony now offered him the direction of the academy of Dresden, with a salary of 2,000 thalers; but Kaulbach preferred to remain in Munich, although he received only 800 florins from the king of Bavaria.