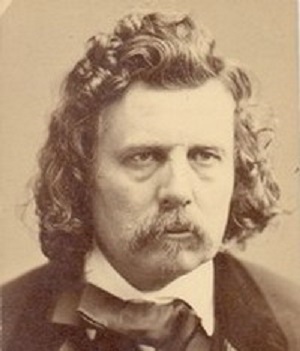 William Holbrook Beard (April 13, 1824 – February 20, 1900) was an American artistic painter who is known best for his satirical paintings of beasts performing human-like activities.


Beard was born in Painesville, Ohio. He studied abroad, is associated with the Düsseldorf school of painting, and during 1861 relocated to New York City, where, in 1862, he became a member of the National Academy of Design. Beard initiated his own artist's studio on Tenth Street in New York City in a building known as the Studio Building.


Beard was a prolific artist. His humorous treatment of bears, cats, dogs, horses and monkeys, generally with some human occupation and expression, usually satirical, gave him a great vogue at one time, and his pictures were much reproduced.

William is buried in Green-Wood Cemetery in Brooklyn, New York.