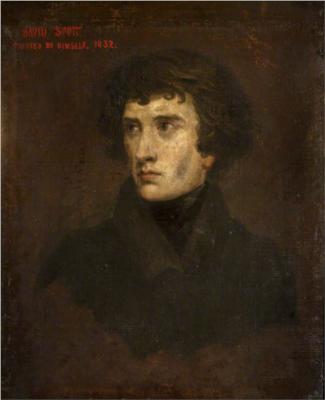 Scott was the brother of William Bell Scott. He was born at Edinburgh, where he attended the Royal High School, and studied art under his father, Robert Scott, the engraver.

In 1828 he exhibited his first oil picture, the "Hopes of Early Genius dispelled by Death," which was followed by "Cain, Nimrod, Adam and Eve singing their Morning Hymn," "Sarpedon carried by Sleep and Death," and other subjects of a poetic and imaginative character.

In 1829 he became a member of the Scottish Academy, and in 1832 visited Italy, where he spent more than a year in study. While in Rome he executed a large symbolical painting, entitled the "Agony of Discord, or the Household Gods Destroyed." The works of his later years include "Vasco da Gama encountering the Spirit of the Storm," a picture immense in size and most powerful in conception finished in 1842, and now preserved in the Trinity House, Leith; the "Duke of Gloucester entering the Water Gate of Calais" (1841); the "Alchemist" (1818), "Queen Elizabeth at the Globe Theatre" (1840) and "Peter the Hermit" (1845), remarkable for varied and elaborate character painting; and "Ariel and Caliban" (1837) and the "Triumph of Love" (1846), distinguished by beauty of colouring and depth of poetic feeling. The most important of his religious subjects are the "Descent from the Cross" (1835) and the "Crucifixion the Dead Rising" (1844).

Scott also executed several remarkable series of designs. Two of these—the "Monograms of Man" and the illustrations to Coleridge's Ancient Mariner—were etched by his own hand, and published in 1831 and 1837 respectively, while his subjects from the Pilgrim's Progress and Nichol's Architecture of the Heavens were issued after his death.

Scott lived at 5 Mary Place, part of Raeburn Place in Stockbridge, Edinburgh. He died at Dalry House in western Edinburgh (now called Orwell Place). Scott was buried in Dean Cemetery, and a monument designed by his brother was set in 1860.