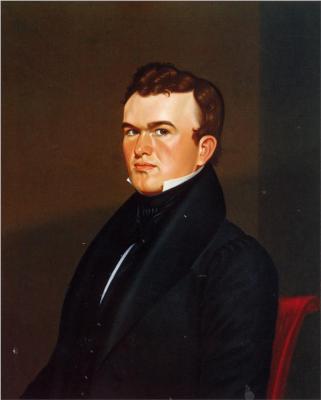 George Caleb Bingham (March 20, 1811 – July 7, 1879) was an American artist whose paintings of American life in the frontier lands along the Missouri River exemplify the Luminist style. Left to languish in obscurity, Bingham's work was rediscovered in the 1930s. By the time of his bicentennial in 2011, he was considered one of the greatest American painters of the 19th century. That year the George Caleb Bingham Catalogue Raisonné Supplement Of Paintings & Drawings—directed and edited by Bingham scholar Fred R. Kline—announced the authentication of ten recently discovered paintings by Bingham. As of June 2015, a total of twenty-three (23) newly discovered paintings by Bingham have been authenticated and are listed with the GCBCRS.

Born in Augusta County, Virginia, George Caleb Bingham was the second of seven children of Mary Amend and Henry Vest Bingham. Upon their marriage, Mary's father Matthias Amend gave the Binghams ownership of the family mill, 1,180 acres (4.8 km) land, and several slaves with the agreement that Matthias could live with the family for the rest of his life. Henry Bingham offered the land and mill as surety for a friend's debt and, when the friend died in 1818, all was lost. The Bingham family soon moved to Franklin, Missouri "where the land was said to be bountiful, fertile and cheap."

George Bingham was a self-taught artist. His sole childhood exposure to the field was as a nine-year-old boy, when famed American portraitist Chester Harding visited Franklin looking for business, having recently sketched Daniel Boone in Warren County, Missouri. George assisted Harding during his brief stay, an experience that left a powerful impression.

In 1823, Bingham's father Henry, then judge of Howard County Court, died of malaria on December 26 at the age of thirty-eight. To keep the family going, Mary Bingham opened a school for girls; George, then twelve, worked as school janitor to help keep the family afloat. At age sixteen, the young Bingham apprenticed with the cabinet maker Jesse Green. After Green moved away, Bingham apprenticed with another cabinet maker, Justinian Williams. Both tradesmen were Methodist ministers. While under their tutelage, Bingham studied religious texts, preached at camp meetings and thought about becoming a minister. He also considered becoming a lawyer.

By age nineteen, Bingham was painting portraits for $20.00 apiece, often completing the works in a single day. He drummed up work in both Franklin and Arrow Rock and, while his painting abilities were still developing, succeeded in impressing his patrons with his strong draftsmanship and ability to capture the likeness of his subject. Soon Bingham was ready to travel to St. Louis to ply his trade but contracted measles. The illness left him weak and permanently bald.

In 1836, Bingham married Sarah Elizabeth Hutchison, who bore him four children over the next twelve years. From 1837 to 1845 they lived in Arrow Rock, Saline County, where their house has been designated a National Historic Landmark. She died in 1848 at the age of twenty-nine. Bingham's mother Mary helped him raise his children before she died in 1851.