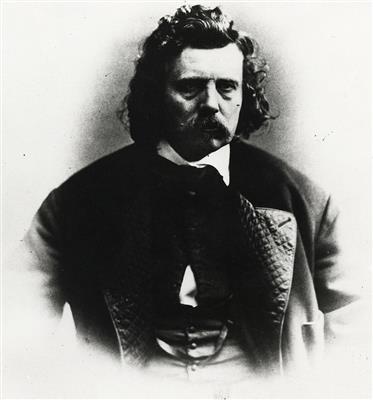 Emanuel Gottlieb Leutze (May 24, 1816 – July 18, 1868) was a German American history painter best known for his painting Washington Crossing the Delaware. He is associated with the Düsseldorf school of painting.

Leutze was born in Schwäbisch Gmünd, Württemberg, Germany, and was brought to the United States as a child. His parents settled first in Fredericksburg, Virginia, and then at Philadelphia. His early education was good, though not especially in the direction of art. The first development of his artistic talent occurred while he was attending the sickbed of his father, when he attempted drawing to occupy the long hours of waiting. His father died in 1831. At 14, he was painting portraits for $5 apiece. Through such work, he supported himself after the death of his father. In 1834, he received his first instruction in art in classes of John Rubens Smith, a portrait painter in Philadelphia. He soon became skilled, and promoted a plan for publishing, in Washington, portraits of eminent American statesmen; however, he met with but slight encouragement.

In 1840, one of his paintings attracted attention and procured him several orders, which enabled him to go to the Kunstakademie Düsseldorf. Due to his anti-academic attitude, he studied only one year at the academy (in the class of Director Schadow). Mainly Leutze was affected by the painter Lessing. In 1842 he went to Munich, studying the works of Cornelius and Kaulbach, and, while there, finished his Columbus before the Queen. The following year he visited Venice and Rome, making studies from Titian and Michelangelo. His first work, Columbus before the Council of Salamanca was purchased by the Düsseldorf Art Union. A companion picture, Columbus in Chains, procured him the gold medal of the Brussels Art Exhibition, and was subsequently purchased by the Art Union in New York; it was the basis of the 1893 $2 Columbian Issue stamp. In 1845, after a tour in Italy, he returned to Düsseldorf, marrying Juliane Lottner and making his home there for 14 years.

During his years in Düsseldorf, he was a resource for visiting Americans: he found them places to live and work, provided introductions, and emotional and even financial support. For many years, he was the president of the Düsseldorf Artists' Association; in 1848, he was an early promoter of the “Malkasten” art association; and in 1857, he led the call for a gathering of artists which led to the founding of the Allgemeine deutsche Kunstgenossenschaft.

A strong supporter of Europe's Revolutions of 1848, Leutze decided to paint an image that would encourage Europe's liberal reformers with the example of the American Revolution. Using American tourists and art students as models and assistants, Leutze finished a first version of Washington Crossing the Delaware in 1850. Just after it was completed, the first version was damaged by fire in his studio, subsequently restored, and acquired by the Kunsthalle Bremen. On September 5, 1942, during World War II, it was destroyed in a bombing raid by the Allied forces. The second painting, a replica of the first, and even just bigger, was ordered 1850 by the Parisian art trader Adolphe Goupil for his New York branch and placed on exhibition on Broadway in October 1851. It is owned by the Metropolitan Museum of Art in New York. In 1854, Leutze finished his depiction of the Battle of Monmouth, "Washington rallying the troops at Monmouth," commissioned by an important Leutze patron, banker David Leavitt of New York City and Great Barrington, Massachusetts.