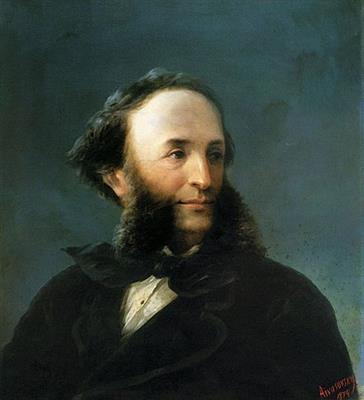 Throughout his lifetime, Aivazovsky contributed over 6,000 paintings to the art world, ranging from his early landscapes of the Crimean countryside to the seascapes and coastal scenes for which he is most famous. Aivazovsky was especially effective at developing the play of light in his paintings, sometimes applying layers of color to create a transparent quality, a technique for which they are highly admired.

Although he produced many portraits and landscapes, over half of all of Aivazovsky’s paintings are realistic depictions of coastal scenes and seascapes. He is most remembered for his beautifully melodramatic renditions of the seascapes of which he painted the most. Many of his later works depict the painful heartbreak of soldiers at battle or lost at sea, with a soft celestial body taunting of hope from behind the clouds. His artistic technique centers on his ability to render the realistic shimmer of the water against the light of the subject in the painting, be it the full moon, the sunrise, or battleships in flames. Many of his paintings also illustrate his adeptness at filling the sky with light, be it the diffuse light of a full moon through fog, or the orange glow of the sun gleaming through the clouds.

In addition to being the most prolific of Russian Armenian painters, Aivazovsky founded an art school and gallery to engage and educate other artists of the day. He also and built a historical museum in his hometown on Feodosia, Crimea, in addition to beginning the first archaeological expeditions of the same region.

Today, Aivazovsky’s paintings have been auctioned off for millions of dollars and have been printed on postage stamps for Russia, Ukraine, and Armenia. Perhaps it is also to his
lasting legacy that he is said to be one of the most forged of all Russian artists.

Ivan Konstantinovich Aivazovsky (Russian: Ива́н Константи́нович Айвазо́вский; 29 July 1817 – 2 May 1900) was a Russian Romantic painter who is considered one of the greatest masters of marine art. Baptized as Hovhannes Aivazian, he was born into an Armenian family in the Black Sea port of Feodosia in Crimea and was mostly based there.

Following his education at the Imperial Academy of Arts in Saint Petersburg, Aivazovsky traveled to Europe and lived briefly in Italy in the early 1840s. He then returned to Russia and was appointed the main painter of the Russian Navy. Aivazovsky had close ties with the military and political elite of the Russian Empire and often attended military maneuvers. He was sponsored by the state and was well-regarded during his lifetime. The saying "worthy of Aivazovsky's brush", popularized by Anton Chekhov, was used in Russia for describing something lovely. He remains highly popular in Russia.

One of the most prominent Russian artists of his time, Aivazovsky was also popular outside Russia. He held numerous solo exhibitions in Europe and the United States. During his almost 60-year career, he created around 6,000 paintings, making him one of the most prolific artists of his time. The vast majority of his works are seascapes, but he often depicted battle scenes, Armenian themes, and portraiture. Most of Aivazovsky's works are kept in Russian, Ukrainian and Armenian museums as well as private collections.

Ivan Aivazovsky was born on 17 July (29 in New Style) 1817 in the city of Feodosia (Theodosia), Crimea, Russian Empire. In the baptismal records of the local St. Sargis Armenian Apostolic Church, Aivazovsky was listed as Hovhannes, son of Gevorg Aivazian (Armenian: Գէորգ Այվազեանի որդի Յօհաննեսն). During his study at the Imperial Academy of Arts, he was known in Russian as Ivan Gaivazovsky (Иванъ Гайвазовскій in the pre-1918 spelling). He became known as Aivazovsky since c. 1840, while in Italy. He signed an 1844 letter with the italianized version of his name: Giovani Aivazovsky.

His father, Konstantin, (c. 1765–1840), was an Armenian merchant from the Polish region of Galicia. His family had migrated to Europe from Western Armenia in the 18th century. After numerous familial conflicts, Konstantin left Galicia for Moldavia, later moving to Bukovina, before settling in Feodosia in the early 1800s. He was initially known as Gevorg Aivazian (Haivazian or Haivazi), but he changed his last name to Gaivazovsky by adding the Polish "-sky". Aivazovsky's mother, Ripsime, was a Feodosia Armenian. The couple had five children—three daughters and two sons. Aivazovsky's elder brother, Gabriel, was a prominent historian and an Armenian Apostolic archbishop.

The young Aivazovsky received parochial education at Feodosia's St. Sargis Armenian Church. He was taught drawing by Jacob Koch, a local architect. Aivazovsky moved to Simferopol with Taurida Governor Alexander Kaznacheyev's family in 1830 and attended the city's Russian gymnasium. In 1833, Aivazovsky arrived in the Russian capital, Saint Petersburg, to study at the Imperial Academy of Arts in Maxim Vorobiev's landscape class. In 1835, he was awarded with a silver medal and appointed assistant to the French painter Philippe Tanneur (fr). In September 1836, Aivazovsky met Russia's national poet Alexander Pushkin during the latter's visit to the Academy. In 1837, Aivazovsky joined the battle-painting class of Alexander Sauerweid and participated in Baltic Fleet exercises in the Gulf of Finland. In October 1837, he graduated from the Imperial Academy of Arts with a gold medal, two years earlier than intended. Aivazovsky returned to Feodosia in 1838 and spent two years in his native Crimea. In 1839, he took part in military exercises in the shores of Crimea, where he met Russian admirals Mikhail Lazarev, Pavel Nakhimov and Vladimir Kornilov.