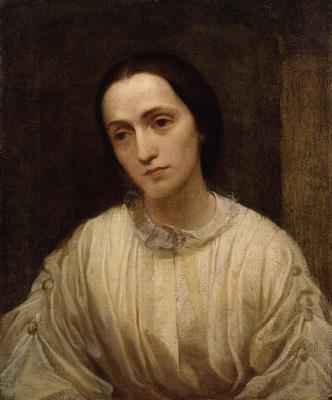 Julia Margaret Cameron (née Pattle; 11 June 1815 Calcutta – 26 January 1879 Kalutara, Ceylon) was a British photographer. She became known for her portraits of celebrities of the time, and for photographs with Arthurian and other legendary or heroic themes.

Cameron's photographic career was short, spanning eleven years of her life (1864–1875). She took up photography at the relatively late age of 48, when she was given a camera as a present. Her style was not widely appreciated in her own day: her choice to use a soft focus and to treat photography as an art as well as a science, by manipulating the wet collodion process, caused her works to be viewed as "slovenly", marred by "mistakes" and bad photography. She found more acceptance among pre-Raphaelite artists than among photographers. Her work has influenced modern photographers, especially her closely cropped portraits. Her house, Dimbola Lodge, on the Isle of Wight is open to the public.

Julia Margaret Cameron was born Julia Margaret Pattle in Calcutta, India, to Adeline Marie de l'Etang and James Peter Pattle, a British official of the East India Company. Adeline de l'Etang was the daughter of Chevalier Ambrose Pierre Antoine de l'Etang, who had been a page of Marie Antoinette as well as an officer in the Garde du Corps of King Louis XVI. He had married the Indian-born Therese Blin de Grincourt, a daughter of French aristocrats.

Cameron was educated in France, but returned to India, and in 1838 married Charles Hay Cameron, a jurist and member of the Law Commission stationed in Calcutta, who was twenty years her senior. They had five children together, and also raised five young relations and an Irish girl called Mary Ryan whom Cameron adopted and used as a frequent photographic model.

In 1848, Charles Hay Cameron retired, and the family moved to London, England. Cameron's sister, Sarah Prinsep, had been living in London and hosted a salon at Little Holland House, the dower house of Holland House in Kensington, where famous artists and writers regularly visited. In 1860, Cameron visited the estate of poet Alfred Lord Tennyson on the Isle of Wight. Cameron was taken with the location, and the Cameron family purchased a property on the island soon after. They called it Dimbola Lodge after the family's Ceylon estate.

In 1863, when Cameron was 48 years old, her daughter gave her a camera as a present, thereby starting her career as a photographer. Within a year, Cameron became a member of the Photographic Societies of London (1864) and Scotland. She remained a member of the Photographic Society, London, until her death. In her photography, Cameron strove to capture beauty. She wrote, "I longed to arrest all the beauty that came before me and at length the longing has been satisfied." In 1869 she collated and gave what is now known as The Norman Album to her daughter and son-in-law in gratitude for having introduced her to photography. The album was later deemed by the Reviewing Committee on the Export of Works of Art to be of "outstanding aesthetic importance and significance to the study of the history of photography and, in particular, the work of Julia Margaret Cameron – one of the most significant photographers of the 19th century."