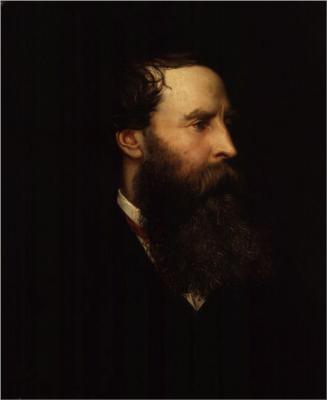 George Heming Mason ARA (11 March 1818 in Stoke-on-Trent – 22 October 1872 in London) was an English landscape painter of rural scenes, initially in Italy, then England itself. He was also known as "George Mason" or "George Hemming Mason".

Mason was born at Fenton Park in the parish of Stoke-upon-Trent, Staffordshire, the eldest son of George Miles Mason (1789–1859) and Eliza Heming (daughter of Major Heming of Mapleton, Derbyshire). His grandfather, Miles Mason, was a potter, and the pottery was afterwards carried on by his father and uncle (Charles James Mason) who invented Mason's iron-stone china. His father, who graduated from Brasenose College, Oxford, was a cultivated man, who retiring from his business in 1829, became a country gentleman, devoting himself to literature and painting. In 1832 the family moved to Wetley Abbey, a mansion situated in the midst of a park, near Wetley Rocks in Staffordshire, five miles from the Potteries.

Mason was educated at King Edward's School, Birmingham, and from 1834 trained to be a doctor under William Royden Watts, a surgeon, of Birmingham, but abandoned medicine in 1844 in order to pursue a career as an artist. As a youth he was passionately fond of literature and athletics, and he inherited his father's taste for painting. An early oil sketch of his exists entitled "Dummy's Turn to Play" in which he tried to embody a ghastly incident of the time of the plague. He was also art critic to a local newspaper.

In the autumn of 1843, Mason left England with his brother Miles on a trip through France, Switzerland, and Italy - the journey was mainly done on foot. They reached Rome in the autumn of 1845, and George took a studio there. Financial difficulties at home soon compelled him and his brother to fend for themselves, and he made a living painting portraits of the English in Rome, and more particularly of their horses and dogs, for which he had a natural talent.

Despite a serious illness and severe poverty, Mason's spirits never sank, and when the Italian war broke out in 1848, he helped to tend the wounded. His brother Miles entered Garibaldi's army as a volunteer, and eventually became a captain. During the 1849 Siege of Rome, Mason and two fellow-artists, George Thomas (1824–1868), an accomplished illustrator who worked for the Illustrated London News, and Murray (sic), were arrested as suspected spies, and narrowly escaped death.

In 1851, Mason made a tour of the Sabine and Ciociara regions and subsequently spent much time painting cattle as the guest of a gentleman grazier of the Campagna. Mason delighted in the Campagna, and produced a number of pictures there including "Ploughing in the Campagna", "In the Salt Marshes" (1856), and "A Fountain with Figures". When thinking out a composition, which often originated in some literary subject, he usually strolled the neighbouring country in search of particular forms and colours for the accessories. Sometimes a new subject would be thus suggested, as in the case of his "Ploughing in the Campagna" for which he deserted another work already begun.