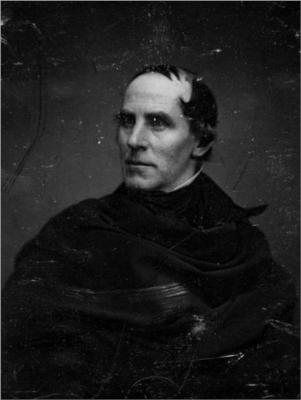 Thomas Cole inspired the generation of American landscape painters that came to be known as the Hudson River School. Born in Bolton-le-Moors, Lancashire, England, in 1801, at the age of seventeen he emigrated with his family to the United States, first working as a wood engraver in Philadelphia before going to Steubenville, Ohio, where his father had established a wallpaper manufacturing business.

Cole received rudimentary instruction from an itinerant artist, began painting portraits, genre scenes, and a few landscapes, and set out to seek his fortune through Ohio and Pennsylvania. He soon moved on to Philadelphia to pursue his art, inspired by paintings he saw at the Pennsylvania Academy of the Fine Arts. Moving to New York City in spring 1825, Cole made a trip up the Hudson River to the eastern Catskill Mountains. Based on his sketches there, he executed three landscapes that a city bookseller agreed to display in his window. Colonel John Trumbull, already renowned as the painter of the American Revolution, saw Cole’s pictures and instantly purchased one, recommending the other two to his colleagues William Dunlap and Asher B. Durand.

What Trumbull recognized in the work of the young painter was the perception of wildness inherent in American scenery that landscape artists had theretofore ignored. Trumbull brought Cole to the attention of various patrons, who began eagerly buying his work. Dunlap publicized the discovery of the new talent, and Cole was welcomed into New York’s cultural community, which included the poet and editor William Cullen Bryant and the author James Fenimore Cooper. Cole became one of the founding members of the National Academy of Design in 1825. Even as Cole expanded his travels and subjects to include scenes in the White Mountains of New Hampshire, he aspired to what he termed a “higher style of a landscape” that included narrative—some of the paintings in paired series—including biblical and literary subjects, such as Cooper’s popular Last of the Mohicans.

By 1829, his success enabled him to take the Grand Tour of Europe and especially Italy, where he remained in 1831–32, visiting Florence, Rome, and Naples. Thereafter he painted many Italian subjects, like View near Tivoli. Morning (1832). The region around Rome, along with the classical myth, also inspired The Titan’s Goblet (1833). Cole’s travels and the encouragement and patronage of the New York merchant Luman Reed culminated in his most ambitious historical landscape series, The Course of Empire (1833–1836), five pictures dramatizing the rise and fall of an ancient classical state.

Cole also continued to paint, with ever-rising technical assurance, sublime American scenes such as the View from Mount Holyoke (1836), The Oxbow (1836), in which he included a portrait of himself painting the vista and View on the Catskill—Early Autumn (1836-1837), in which he pastorally interpreted the prospect of his beloved Catskill Mountains from the village of Catskill, where he had moved the year before and met his wife-to-be, Maria Bartow.

The artist’s marriage brought with it increasing religious piety manifested in the four-part series The Voyage of Life (1840). In it, a river journey represents the human passage through life to eternal reward. Cole painted and exhibited a replica of the series in Rome, where he returned in 1841–42, traveling south to Sicily. After his return, he lived and worked chiefly in Catskill, keeping up with art activity in New York primarily through Durand. He continued to produce American and foreign landscape subjects of incredible beauty, including the Mountain Ford (1846).

In 1844, Cole welcomed into his Catskill studio the young Frederic Church, who studied with him until 1846 and went on to become the most renowned exponent of the generation that followed Cole. By 1846, Cole was at work on his largest and most ambitious series, The Cross and the World, but in February 1848 contracted pleurisy and died before completing it.

The paintings of Thomas Cole, like the writings of his contemporary Ralph Waldo Emerson, stand as monuments to the dreams and anxieties of the fledgling American nation during the mid-19th century; and they are also euphoric celebrations of its natural landscapes. Cole is considered the first artist to bring the eye of a European Romantic landscape painter to those environments, but also a figure whose idealism and religious sensibilities expressed a uniquely American spirit. In his works, we find the dramatic splendor of Caspar David Freidrich or J.M.W Turner transposed onto the Catskill and Adirondack Mountains. But whereas younger American painters such as Albert Bierstadt had come into direct contact with The Düsseldorf School of painting, and thus with the tradition in which they placed themselves, Cole was largely self-tutored, representing something of the archetypal American figure of the auto-didact.

In many ways, Cole's art epitomizes all contradictions of European settler culture in America. He was in love with the sublime wildness of the American landscape and sought to preserve it with his art, but his very presence in that landscape, and the development of his career, depended on the processes of urbanization and civilization which threatened it. From a modern perspective, Cole's Eurocentric gaze on seemingly empty wildernesses which had, in fact, been populated for centuries, also seems troubling; where Native Americans do appear in his work, as in Falls of the Kaaterskill (1826), it is as picturesque flecks rather than characterized participants in the scene.

Cole's legacy is evident in the work of future American artists who advanced the Hudson River style, including his student Frederic Edwin Church, Albert Bierstadt, Jasper Cropsey, Asher B. Durand, George Inness, John Kensett, and Thomas Moran. Speaking more broadly, a whole sweep of 20th-century North-American art, from Precisionism to Land Art, might be seen to have inherited something of the grand scale and ambition of Cole's work. In this sense, his paintings capture not only the character of American culture during the mid-19th century but perhaps something more enduring about the open and expansive quality of that culture.

Thomas Cole (February 1, 1801 – February 11, 1848) was an English-born American painter known for his landscape and history paintings. He is regarded as the founder of the Hudson River School, an American art movement that flourished in the mid-19th century. Cole's work is known for its romantic portrayal of the American wilderness.

Born in Bolton le Moors, Lancashire, in 1801, Cole emigrated with his family to the United States in 1818, settling in Steubenville, Ohio. At the age of 22, Cole moved to Philadelphia and later, in 1825, to Catskill, New York, where he lived with his wife and children until 1847.

Cole found work early on as an engraver. He was largely self-taught as a painter, relying on books and by studying the work of other artists. In 1822, Cole started working as a portrait painter and later on, gradually shifted his focus to landscape.

In New York, Cole sold five paintings to George W. Bruen, who financed a summer trip to the Hudson Valley where the artist produced landscapes featuring the Catskill Mountain House, the famous Kaaterskill Falls, the ruins of Fort Putnam, and two views of Cold Spring. Returning to New York, he displayed five landscapes in the window of William Colman's bookstore; according to the New York Evening Post the two views of Cold Spring were purchased by Mr. A. Seton, who lent them to the American Academy of the Fine Arts annual exhibition in 1826. This garnered Cole the attention of John Trumbull, Asher B. Durand, and William Dunlap. Among the paintings was a landscape called View of Fort Ticonderoga from Gelyna. Trumbull was especially impressed with the work of the young artist and sought him out, bought one of his paintings, and put him into contact with a number of his wealthy friends including Robert Gilmor of Baltimore and Daniel Wadsworth of Hartford, who became important patrons of the artist.

Cole was primarily a painter of landscapes, but he also painted allegorical works. The most famous of these are the five-part series, The Course of Empire, which depict the same landscape over generations—from a near state of nature to consummation of empire, and then decline and desolation—now in the collection of the New York Historical Society and the four-part The Voyage of Life. There are two versions of the latter, one at the National Gallery in Washington, D.C., the other at the Munson-Williams-Proctor Arts Institute in Utica, New York. Among Cole's other famous works are the Oxbow (1836) (pictured below), the Notch of the White Mountains, Daniel Boone at his cabin at the Great Osage Lake, and Lake with Dead Trees (1825) which is at the Allen Memorial Art Museum. He also painted The Garden of Eden (1828), with lavish detail of Adam and Eve living amid waterfalls, vivid plants, and deer. In 2014, friezes painted by Cole on the walls of his home, but which had been decorated over, were discovered.