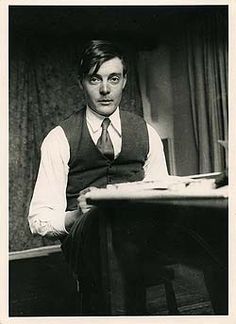 Eric William Ravilious (22 July 1903 – 2 September 1942) was an English painter, designer, book illustrator and wood-engraver. He grew up in East Sussex, and is particularly known for his watercolours of the South Downs and other English landscapes, which examine English landscape and vernacular art with an off-kilter, modernist sensibility and clarity. He served as a war artist, and died when the aircraft he was in was lost off Iceland.

Ravilious was born on 22 July 1903 in Churchfield Road, Acton, London, the son of Frank Ravilious and his wife Emma (née Ford). While he was still a small child the family moved to Eastbourne in Sussex, where his parents ran an antique shop.

He was educated at Eastbourne Grammar School. In 1919 he won a scholarship to Eastbourne School of Art and in 1922 another to study at the Design School at the Royal College of Art. There he became close friends with Edward Bawden (his 1930 painting of Bawden at work is in the collection of the College) and, from 1924, studied under Paul Nash. Nash, an enthusiast for wood engraving, encouraged him in the technique, and was impressed enough by his work to propose him for membership of the Society of Wood Engravers in 1925, and helped him to get commissions.

In 1925 he received a travelling scholarship to Italy and visited Florence, Siena, and the hill towns of Tuscany. Following this he began teaching part-time at the Eastbourne School of Art, and from 1930 taught (also part-time) at the Royal College of Art. In the same year he married Eileen Lucy "Tirzah" Garwood, also an artist and engraver. They would have three children together: John Ravilious; the photographer James Ravilious; and Anne Ullmann, editor of books on her parents and their work.

In 1928 Ravilious, Bawden and Charles Mahoney painted a series of murals at Morley College in South London on which they worked for a whole year. Their work was described by J. M. Richards as "sharp in detail, clean in colour, with an odd humour in their marionette-like figures" and "a striking departure from the conventions of mural painting at that time", but was destroyed by bombing in 1941.

Between 1930 and 1932 Ravilious and Garwood lived in Hammersmith, London, where there is a blue plaque on the wall of their house at the corner of Upper Mall and Weltje Road. When Ravilious and Bawden graduated from the RCA they began exploring the Essex countryside in search of rural subjects to paint. Bawden rented Brick House in Great Bardfield as a base and when he married Charlotte Epton, his father bought it for him as a wedding present. Ravilious and Garwood lodged in Brick House with the Bawdens until 1934 when they purchased Bank House at Castle Hedingham, which is now also marked by a blue plaque. There were eventually several other Great Bardfield Artists. In 1933 Ravilious and his wife painted murals at the Midland Hotel in Morecambe. In November 1933, Ravilious held his first solo exhibition at the Zwemmer Gallery in London and 20 of the 37 works displayed were sold.