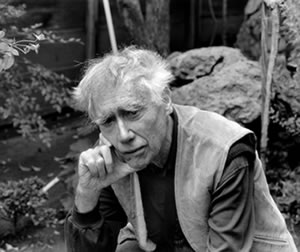 Eyvind Earle (April 26, 1916 – July 20, 2000) was an American artist, author and illustrator, noted for his contribution to the background illustration and styling of Disney animated films in the 1950s. The Metropolitan Museum of Art, New York, Rahr West Art Museum, Phoenix Art Museum and Arizona State University Art Museum have purchased Earle's works for their permanent collections. His works have also been shown in many one-man exhibitions throughout the world.

Earle was born in New York, but his family moved to Hollywood in 1918. He began painting when he was 10 years old, and had his first solo show in France when he was 14.

Earle's first New York exhibition was at the Charles Morgan Galleries in 1937. In a 1939 exhibition, the Metropolitan Museum of Art purchased one of his works for its permanent collection. His work at this time was realistic painting. In the 1940s he painted more than 800 Christmas card designs for the American Artist Group.

In 1951 he joined Disney as an assistant background painter and received credit for the experimental background painting in the Goofy short, For Whom the Bulls Toil. In 1953 he created the look of Toot, Whistle, Plunk and Boom, a short animated film which won an Academy Award and a Cannes Film Festival Award. He also worked on Peter Pan, Working for Peanuts, Pigs is Pigs, Paul Bunyan, and Lady and the Tramp. He was responsible for the styling, background and colors for the highly acclaimed Sleeping Beauty.

In 1961, Earle completed an 18-minute animated segment of the Nativity story for the Tennessee Ernie Ford hosted television special The Story Of Christmas on NBC.

Earle returned to full-time painting in 1966, producing watercolors, oils, sculptures, drawings, scratchboards, and limited-edition serigraphs. Much of this work was not exhibited in his lifetime.

Earle's work and distinct graphic styling has continued to inspire new generations of artists and animators, serving to influence the look of other animated films. These have included the Disney features Pocahontas and Frozen, as well as the graphic style of Sony's first computer animated film, Open Season.

The Banner Saga, a video game by developers Stoic, draws heavily from Earle's style and contains a character named after him. He is credited for 'Artistic Inspiration'.

In 1998, Earle was honored at the 26th Annie Awards with the Winsor McCay Award for a lifetime achievement in the art of animation.

In 2015, in a presentation at the D23 Expo in Anaheim, California, Earle was inducted as a Disney Legend. His daughter, Kristin Thompson, accepted on her father's behalf.