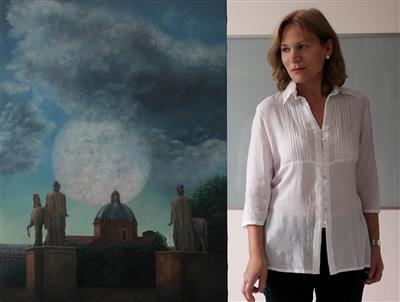 Consuelo Hernández next to one of his works

His first solo exhibition of painting done in 1980 in Plasencia (Cáceres), in which his work shows the influence of the French Impressionists, influence is leaving back to full immersion in the pictorial realism, often poetic , as many critics have said of his work:
The theme of his work focuses on people, beings and objects of their everyday environment, as well as worlds, based on reality, are the creation of the artist.
In the path of Consuelo Hernández is noteworthy international relevance and especially his stay in Tangier for six years (1997-2003) city and country that left a great impression on the artist, both personally and creatively. During that stage his works are inspired by the architecture of international decadent era of the city, in particular the collection dedicated to the Cervantes Theatre.
Spanish artist consolidated, with great international relevance, his work has been exhibited in international art fairs in Chicago, Hong Kong, Singapore, Paris, The Hague, Madrid ... and festivals international. Consuelo Hernández's work has toured the halls of the Cervantes Institute in Tangiers, Rabat, Casablanca, Fez and Tetouan (Morocco).
In July 2012 a selection of his work was exhibited at the National Library of Shanghai Pudong and the CEIBS (Art Investment Forum) Shanghai (China) Its international exhibitions have continued in 2013 in the gallery Bridge Beijing and Shenzhen (China), at he Wison Art Center museum, and the Global Harbor in Shanghai, as well as the Gallery-M Vienna (Austria).
His international exhibitions continued in 2013 at the Bridge Gallery in Beijing and in Shenzhen, China, as well as at the Gallery-M in Vienna, Austria, at the Wison Art Museum and the Global Harbor in Shanghai.
Similarly, his individual and collective exhibitions in galleries and Spanish art spaces have continued, such as those held in the "Botica del Arte" gallery in A Coruña and in the "Espacio 36" gallery in Zamora.
It is worth mentioning the retrospective exhibition that during the months of July and August of 2015 the Diputación de Salamanca organized in the beautiful space of the Palace of the Salina of the same city with great repercussion between the public and in the means.
In January 2017 he participated with the donation of a work in the charity exhibition organized by ALAS SOLIDARIAS (Association of Lupus of Asturias). Exhibition in the Auditorio Príncipe Felipe de Oviedo.
April 2017: "Genova Art Expo 2017", exhibition organized by Satura Art Gallery at Palazzo Stella, Piazza Stella, Genoa (Italy)
Invited to participate, along with 29 other artists from all sectors and national level, such as Ágata Ruiz de la Prada, Paloma San Basilio, Vitorio and Luchino, Okuda, etc. In the sample "The return of Willy Fog" organized by APADIS-Bahía de Algeciras (Association of parents of intellectual disabled) with the participation and sponsorship of various institutions. The exhibition, currently in the Municipal Museum of Algeciras, will be traveling through several Spanish cities.
2017:
Awarded at the Genoa Art Biennial of Genoa, International Contemporary Art Exhibition Genoa (Italy)
Collective exhibition dedicated to women in Sala Birolli in Verona (Italy).
Individual exhibition "Living reality" in the Palace of the Island. City Council of Cáceres (Spain)
2018:
Individual exhibition "Habitando la realidad" at the Museum of the City of Móstoles, Madrid (Spain)
Distinguished with a street to his name in Moraleja, municipality of Extremadura.
Awarded with the prestigious "International Prize Caravaggio-Great Master of Art" in the city of Milan (Italy)