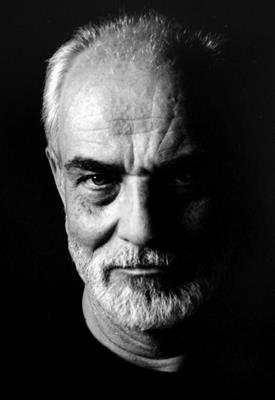 Aydin Aghdashloo (born October 30, 1940) is an Iranian painter, graphist, writer, film critic and one of the known artists of Iranian modern and contemporary art. His art works are known for showing the thought of gradual death and doom and also recreating remarkable classic works in a modern and surrral form. His two series Termination Memories and Years of Fire and Snow are considered part of the most important series of modern Iranian art.
Aghdashloo began designing, graphics and painting since adolescence and became the painter of Iranian textbooks, magazines and private institutions in youth. For a while, he directed the cultural and artistic affairs of "Special Office of Queen Farah Pahlavi" and helped collecting Iranian and global artworks. He was also involved in launching Tehran Museum of Contemporary Art and Reza Abbasi Museum, and directed the latter for a while. After the revolution, Aghdashloo is considered one of the most famous painting masters for the third generation modern Iranian painters.
As of now, Aghdashloo has held two individual exhibitions in Iran. The first one was at Iran-America Society in Tehran on 1975 and the second one in November 2014. In addition to several modern paintings, he has hundreds of writings including art and film criticism, research about the history of art, and travel literature.

Aydin Aghdashloo (Persian: آیدین آغداشلو‎; born October 30, 1940) is an Iranian painter, graphist, writer, film critic. Aghdashloo was decorated with the Chevalier(Knight) award, by the French government for his civil achievements.

Aydin Aghdashloo, son of Mohammad-Beik Aghdashloo (Haji Ouf) and Nahid Nakhjevan, was born on October 30, 1940 in the Afakhray neighborhood of Rasht, Iran. His father was a Caucasian-Azerbaijani and a member of the Equality Caucasian Party and his family assumes their surname from the small town of Agdash. After seeing Aydin's talent in painting at school and his hand-made models, Mohammad-Beik took him to Habib Mohammadi, a painter and a teacher from Rasht. Aghdashloo's aunt and her husband were merchants and wealthy ones. While living with them, Aghdashloo passed much time painting alone. After seeing his talent in painting, his aunt enlisted him at painting classes of Monseigneur Basil and it was there he first learned about the oil painting technique.

At the age of 19, after successfully passing the university entrance examination, he enrolled at Tehran University's school of Fine Arts; then he dropped college at 1967. In 1975, Aghdashloo held his first individual exhibition at Iran-America Society in Tehran. The exhibited paintings were mostly about floating things, dolls and some works about the Renaissance. Between 1976 and 1979, Aghdashloo helped open and launch Museums Abghineh va Sofalineh and Contemporary Arts in Tehran and also Kerman and Khorram-Abad Museums.

Aghdashloo was the holder and coordinator of several exhibitions after the Iranian revolution. While none of them were special exhibitions of his works, they played an important role in introducing contemporary Iranian art to the people inside and outside Iran. He took multiple exhibitions from Iran to other countries, including "Iranian Art, since the Past until Today" in China, "Past Iranian Art" in Japan, and the contemporary Iranian paintings with a traditional background sent to Bologna, Italy.

Aghdashloo's interest in including surreal spaces in his works and painting floating objects began in his 30 years of age. During the period, his works were of floating objects having a shadow on the ground. In a surrealistic environment, he painted dolls having no faces influenced by Gergeo Deki Riko and they later became a large part of his series "Years of Fire and Snow". According to him, painting of such faceless dolls helped him say the subconscious suspicious and illusive word in the form of a painting.

After the 1979 revolution and the eight-year war, most of Aghdashloo's works were about memorials and objects proceeding to doom and damage; abandoned huts and views, green wooden rotten windows with broken glasses, old doors with rusted locks, and deadly blades as symbols of missiles hitting the cities; all of them showed the painter's thinking of gradual doom and damage as the passing of hard times. Utilizing Iranian miniature continued in his works and he used every Iranian classic style and space for transferring his subjective concepts about the contemporary world.

Aghdashloo paints most of his works by gouache on canvas.

Until 2014, Aghdashloo had held only one individual exhibition in Iran. The 2014 exhibition began at Asar Gallery in Tehran on November He has also drawn some paintings for books by Bahram Beyzai, like Ayyarnameh, Modern Preface of Shahnameh, and Sheikh Sherzin's Scroll.