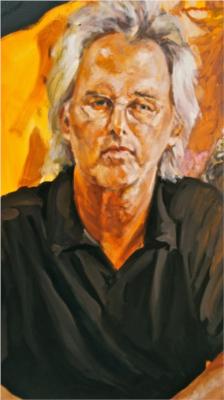 Eric Fischl (born March 9, 1948) is an American painter, sculptor, printmaker, draughtsman and educator. Known for his Neo-Expressionist paintings of depictions of American suburbia from the 1970s and 1980s.

Fischl was born in New York City and grew up on suburban Long Island; his family moved to Phoenix, Arizona, in 1967. His art education began at Phoenix College for two years, followed with Then studying at Arizona State University. Followed by studying at the California Institute of the Arts in Valencia, California, where he received a B.F.A. in 1972. He then moved to Chicago, taking a job as a guard at the Museum of Contemporary Art.

Between 1974 and 1978 he taught at the Nova Scotia College of Art and Design in Halifax, Nova Scotia. It was at this school in which is where he met his future wife, painter April Gornik. In 1978, he moved back to New York City.

In 2002, Fischl collaborated with the Museum Haus Esters in Krefeld, Germany. Haus Esters is a 1928 home, designed by Mies van der Rohe in 1928 to be a private home. It now houses changing exhibitions. Fischl refurbished it as a home (though not particularly in Bauhaus style) and hired models who, for several days, pretended to be a couple who lived there. He took 2,000 photographs, which he reworked digitally and used as the basis for a series of paintings, one of which, the monumental Krefeld Redux, Bedroom #6 (Surviving the Fall Meant Using You for Handholds) (2004) was purchased by Paul Allen featured in the 2006 Double Take Exhibit at Experience Music Project, where it was juxtaposed with a much smaller Degas pastel. This is by no means the first time Fischl has been compared to Degas.

Twenty years earlier, reviewing a show of 28 Fischl paintings at New York's Whitney Museum, art critic John Russell wrote in The New York Times, "[Degas] sets up a charged situation with his incomparable subtlety of insight and characterization, and then he goes away and leaves us to figure it out as best we can. That is the tactic of Fischl, too, though the society with which he deals has an unstructured brutality and a violence never far from release that are very different from the nicely calibrated cruelties that Degas recorded."