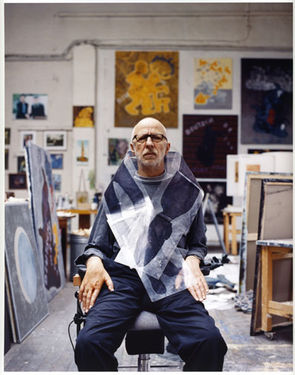 Jörg Immendorff (June 14, 1945 – May 28, 2007) was a contemporary German painter, sculptor, stage designer and art professor. He was a member of the art movement Neue Wilde.

Immendorff was born in Bleckede, Lower Saxony,near Lüneburg on the west bank of the Elbe . When he was 11 years old, his father left the family. This traumatic experience has been used to explain Immendorff's later feelings of inadequacy and emotional remoteness. He attended the boarding School Ernst-Kalkuhl Gymnasium as a student. At the age of sixteen he had his first exhibition in a jazz cellar in Bonn.

From 1963, Immendorff studied at the Art Academy in Düsseldorf (Kunstakademie Düsseldorf). In the beginning, he studied for three terms with the theater designer Teo Otto. After Otto threw him out of his class for refusing to let one of his paintings serve as stage-set decoration, Immendorff was accepted as a student by Joseph Beuys. The academy expelled him because of some of his (left-wing) political activities and neo-dadaist actions. From 1969 to 1980, he worked as an art teacher at a public school, and then as a free artist, holding visiting professorships all over Europe. In 1989, he became professor at the Städelschule in Frankfurt am Main and in 1996 he became professor at the Art Academy in Düsseldorf—the same school that had dismissed him as a student.

Jörg Immendorff often worked in "grand cycles of paintings" that often lasted years at a time and were political in nature. Notable cycles include LIDL, Maoist Paintings, Cafè Deutschland , and The Rake's Progress.

The first body of work that Immendorff gave a name to were his LIDL paintings, sculptures, performances, and documents, that he executed during 1968-1970. The name, "LIDL" was inspired by the sound of a child's rattle makes and much of his work from this period included the iconography of new beginnings and innocence. LIDL is comparable to Dadaist but unlike the Dadist movement it never became an established group but rather consisted of a variety of artists (including James Lee Byars, Marcel Broodthaers, Nam June Paik, and Joseph Beuys) participating in actions and activities. The art-historian Pamela Kort wrote this of Immendorf's LIDL works:

"LIDL ridiculed elitist art traditions, the cult of creative 'genius', and the precious aesthetic object. The artist countered these hierarchies by assembling a body of pretentious iconographic motifs drawn from the make-believe world of the child - turtles, dogs, goldfish, playhouses, and polar bears - which he transformed into the 'working material' of what he hoped would be a new functional art form."

In January 1968 he appeared in front of the West German Parliament in Bonn with a wood block labeled “Lidl” tethered to his ankle and painted in the colors of the German flag; he was subsequently arrested for defaming the flag.

Best known is his Café Deutschland series of sixteen large paintings (1977–1984) that were inspired by Renato Guttuso’s Caffè Greco; in these crowded colorful pictures, Immendorff had disco-goers symbolize the conflict between East and West Germany. Since the 1970s, he worked closely with the painter A. R. Penck from Dresden (in East Germany). Immendorff was a member of the German art movement Neue Wilde.