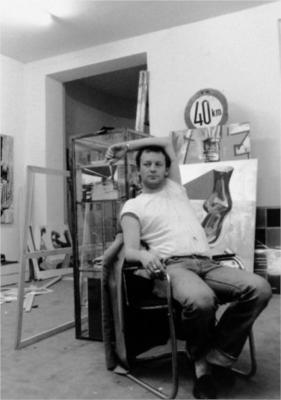 Martin Kippenberger (25 February 1953 – 7 March 1997) was a German artist and sculptor known for his extremely prolific output in a wide range of styles and media, superfiction as well as his provocative, jocular and hard-drinking public persona.

Kippenberger was "widely regarded as one of the most talented German artists of his generation," according to Roberta Smith of the New York Times. He was at the center of a generation of German enfants terribles including Albert Oehlen, Markus Oehlen, Werner Büttner, Georg Herold, Dieter Göls, and Günther Förg.

Kippenberger was born in Dortmund in 1953, the only boy in a family with five children, with two elder and two younger sisters. His father was director of the Katharina-Elisabeth colliery, his mother a dermatologist. When Kippenberger's mother was killed by a pallet falling off a truck, he inherited enough money to live on. He studied at the Hochschule für Bildende Kunst in Hamburg, where Sigmar Polke, despite not teaching him directly, influenced him. After a sojourn in Florence, where he had his first solo show in 1977, he settled in Berlin in 1978. In that year he founded Kippenberger's Office with Gisela Capitain, mounting exhibitions of his own art and that of his friends. During that same period, Kippenberger also became business director of SO36, a performance, film and music space, and started a punk band called the Grugas, which recorded a single called Luxus with Christine Hahn and Eric Mitchell. Leaving Berlin, originally for a long visit to Paris, Kippenberger spent the early 1980s as an active member of the Cologne art scene.

In Cologne, as elsewhere, Kippenberger did not limit himself to producing works of art; he worked on how the art was presented, the framework and the sideshows. "Martin was tremendously committed to the gallery's artists," Max Hetzler said. The Vienna gallerist Peter Pakesch thinks Kippenberger did an enormous amount for the Hetzler Gallery's success in his double role "as clown and strategist... Max without Martin's strategy would have been unimaginable in the early years." According to artist Jutta Koether, Kippenberger "was the one who brought movement to life so that it became known outside Cologne."

In 1984, he became a founding member of the Lord Jim Lodge. After moving to Los Angeles in late 1989, he bought a 35% share in ownership of the Italian restaurant Capri in Venice, Los Angeles. He stayed in Sankt Georgen im Schwarzwald as a guest of the Grässlin family of art collectors from 1980 to 1981, and later on and off from 1991 to 1994, in order to work but also to recover from his excessive life. In his last years he taught at the Städelschule and the Kassel Art Academy.

Martin Kippenberger died at age 44 from liver cancer at the Vienna General Hospital.

Kippenberger’s refusal to adopt a specific style and medium in which to disseminate his images resulted in an extremely prolific and varied oeuvre which includes an amalgam of sculpture, paintings, works on paper, photographs, installations, prints and ephemera.