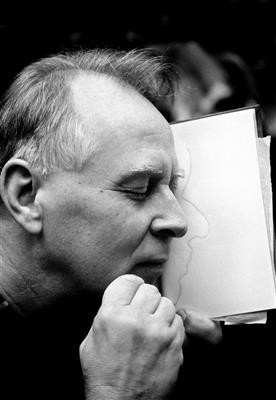 Sigmar Polke created complex works that have helped define the art of the time. From painting to photography and film to installations and prints, Polke's work, which often incorporated non-traditional materials and techniques, was above all a critique of art itself.

In 1961, Polke enrolled at the Düsseldorf Arts Academy, where he studied until 1967. Teachers at the school included Karl Otto Gotz and Joseph Beuys, both of whom had radical approaches that would strongly influence Polke.

During the postwar years, Polke began making his "dot" paintings, manually executed parodies of the dot screens used by Roy Lichtenstein and Andy Warhol. The example of such paintings is Bunnies (1966). Although Polke shared visual strategies with American Pop artists, he was not so much appropriating the visual style of advertising as depicting objects of a consumer society. While at the Kunstakademie Düsseldorf in 1963, Polke and fellow students Konrad Lueg and Gerhard Richter consolidated their ideas within a group they called Capitalist Realism. The humorous and deliberately "unskilled" qualities of Polke's earliest works formalized a critique of both Socialist Realism and Pop art.

During the 1970s, Polke slowed his art production in favor of travel to Afghanistan, Brazil, France, Pakistan, and the U.S. There he shot photographs and film footage that he would use in his subsequent works during the 1980s. Incorporating materials such as sheer synthetic fabrics, colored lacquers, and hydrosensitive chemicals in combination with paint, he undermined the conventions of painting. He challenged its appropriateness as a medium to comment on contemporary life. Kathreiners Morgenlatte (1969-1979), with its layered composition of the fabric and painted imagery, is an example of this questioning. By reconciling a complex group of references in Kathreiners Morgenlatte, Polke presents a critique of the condition of the artist and the impossibility of sustained originality in contemporary art in the late 20th century.

In 1977, Polke was given a position as a professor at the Academy of Fine Arts in Hamburg, Germany, and remained in the post until 1991. He moved permanently to Cologne in 1978, where he lived and worked for the remainder of his life, aside from his travels. In the 1980s, Polke's art took on a more serious tone. At the beginning of the decade, he traveled to Australia and Southeast Asia, where he discovered a variety of non-traditional materials that he used in his artworks. For instance, Polke began incorporating meteor dust and arsenic, which reacted chemically on the canvas.

The 1980s saw a significant international revival of painting as a medium and Polke was at the forefront of this, along with his former collaborator, Gerhard Richter. He continued to produce art until his death in 2010, often in collaboration with his wife, and always experimenting with new materials and media, including photocopies and holograms.

At the fore of Polke's experiments was the impulse to challenge virtually every convention of art, often in surprising and ingenious ways. His iconoclastic tendencies extended not merely to content but to the materials of the works themselves, which were often adamantly non-traditional. From uranium and meteorite dust, brightly printed fabric and soot, to bubble wrap and potatoes, Polke's artistic odyssey took him and his work to the potential limits of creation. Polke's unorthodox style proved a significant influence on a large group of younger artists. Most of them came to prominence in the 1980s when Polke was at the height of his fame and had been featured in several high-profile international exhibitions. Among the younger generation of artists who cite Polke as inspiration are sculptor Annette Messager, and multimedia artists Peter Fischli and David Weiss. Later, Polke's critical role in reviving painting practices influenced painters such as David Salle, Julian Schnabel, and Richard Prince.

Polke experimented with a wide range of styles, subject matters and materials. In the 1970s, he concentrated on photography, returning to paint in the 1980s, when he produced abstract works created by chance through chemical reactions between paint and other products. In the last 20 years of his life, he produced paintings focused on historical events and perceptions of them.

Polke, the seventh in a family of eight children, was born in Oels in Lower Silesia. He fled with his family to Thuringia in 1945, during the expulsion of Germans after World War II. His family escaped from the Communist regime in East Germany in 1953, traveling first to West Berlin and then to West Germany Rhineland.

Upon his arrival in West Germany, in Willich near Krefeld, Polke began to spend time in galleries and museums and worked as an apprentice in a stained glass factory in Düsseldorf between 1959 and 1960, before entering the Kunstakademie Düsseldorf (Arts Academy) at age twenty. From 1961 to 1967 he studied at the Düsseldorf Arts Academy under Karl Otto Götz, Gerhard Hoehme and deeply influenced by his teacher Joseph Beuys. He began his creative output during a time of enormous social, cultural, and artistic changes in Germany and elsewhere. During the 1960s, Düsseldorf, in particular, was a prosperous, commercial city and an important centre of artistic activity. In the early 1970s Polke lived at the Gaspelhof, an artists' commune.

From 1977–1991, he was a professor at the Academy of Fine Arts, Hamburg. His students included, among others, Georg Herold. He settled in Cologne in 1978, where he continued to live and work until his death in June 2010 after a long battle with cancer.

In 1963, Polke founded the painting movement "Kapitalistischer Realismus" ("Capitalist realism") with Gerhard Richter and Konrad Fischer (alias Konrad Lueg as artist). It is an anti-style of art, appropriating the pictorial shorthand of advertising. This title also referred to the realist style of art known as "Socialist Realism", then the official art doctrine of the Soviet Union and its satellites (from one which he had fled with his family), but it also commented upon the consumer-driven art "doctrine" of western capitalism. He also participated in "Demonstrative Ausstellung", a store-front exhibition in Düsseldorf with Manfred Kuttner, Lueg, and Richter. Essentially a self-taught photographer, Polke spent the next three years painting, experimenting with filmmaking and performance art.

In 1966-68, during his most conceptual period, Polke used a Rollei camera to capture ephemeral arrangements of objects in his home and studio. In 1968, the year after he left the art academy, Polke published these images as a portfolio of 14 photographs of small sculptures he had made from odds and ends—buttons, balloons, a glove. From 1968 to 1971, he completed several films and took thousands of photographs, most of which he could not afford to print.

During the 1970s, Polke slowed his art production in favor of travel to Afghanistan, Brazil, France, Pakistan, and the U.S., where he shot photographs (using a handheld 35mm Leica camera) and film footage that he would incorporate in his subsequent works during the 1980s. In 1973 he visited the U.S. with artist James Lee Byars in search of the "other" America; the fruit of that journey was a series of manipulated images of homeless alcoholics living on New York's Bowery. He produced an additional series of photographic suites based on his journeys to Paris (1971), Afghanistan and Pakistan (1974) and São Paulo (1975), often treating the original image as raw material to be manipulated in the dark room, or in the artist's studio. Beginning with his 1971 Paris photographs printed using chemical staining to create works full of strange presences while under the influence of LSD, Polke exploited the photographic process as a means to alter "reality." He combined both negatives and positives with images that had both vertical and horizontal orientations. The resulting collage-like compositions take advantage of under- and overexposure and negative and positive printing to create enigmatic narratives. With the negative in his enlarger, the artist developed large sheets selectively, pouring on photographic solutions and repeatedly creasing and folding the wet paper.