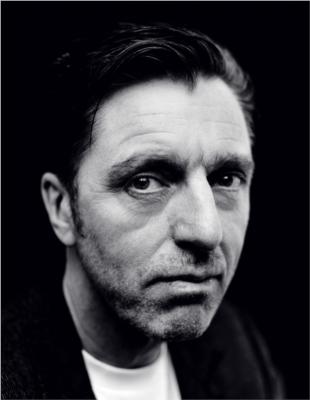 Albert Oehlen (born 1954 in Krefeld, West Germany) is a contemporary German artist. Oehlen lives and works in Bühler and Segovia.

Born in Krefeld, West Germany, in 1954, Oehlen moved to Berlin in 1977, where he worked as a waiter and decorator with his friend, the artist Werner Büttner. He graduated from the Hochschule für bildende Künste Hamburg, in 1978. Along with Martin Kippenberger and Georg Herold, Oehlen was a member of Berlin "bad boy" group.

Closely associated with the Cologne art scene, Oehlen was a member of the Lord Jim Lodge, along with Martin Kippenberger among others. His art is related to the Neue Wilde movement. He has more recently been described as a 'free radical'.

Influenced by other German painters such as Georg Baselitz, Sigmar Polke and Gerhard Richter, Oehlen focuses on the process of painting itself. During the 1980s he began combining abstract and figurative elements of painting in his works, as part of a reaction to the prevailing Neo-Expressionist aesthetic of the time. In the following years, he worked within self-imposed, often absurd, parameters. He used only gray tones for his "Grey" paintings and limited himself to red, yellow, and blue for another series of what he calls "bad" paintings that included his infamous 1986 portrait of Adolf Hitler. In his paintings of the late 1990s, each piece consists of smears and lines of paint Oehlen brushed and sprayed over collaged imagery that had been transferred to canvas by the type of gigantic inkjet printers used to manufacture billboards.

In 2002, Oehlen exhibited the "Self-Portraits" series which included eight self-portraits among them Frühstück Now (Self-Portrait)(1984), Self-Portrait With Open Mouth (2001) and Self-Portrait as a Dutch Woman (1983).

In Oehlen's recent work, flat, figurative cut-outs-all the products of computer-aided design (CAD), and gestural strokes of oil paint trade places in the service of collage. In his recent Finger Paintings, color-blocked advertisements are an extension of the canvas, providing fragmented, readymade surfaces for Oehlen’s visceral markings, made with his hands, as well as brushes, rags, and spray-cans.

In 2014 Skarstedt Gallery (London, U.K.) hosted Oehlen' "Fabric Paintings" exhibition, featuring fourteen of the twenty paintings made from 1992 to 1996, and mostly kept in his studio. In 2015 Oehlen had his first major New York exhibition, "Albert Oehlen: Home and Garden" at the New Museum of Contemporary Art a self-portraits selection from 1980s and 1990s.

In the 1990s, Oehlen briefly ran his own independent label, Leiterwagen, putting out experimental electronica. Since the late 1990s Oehlen has played in the bands Red Krayola and Van Oehlen. References to music are frequent in his paintings and drawings. His artwork is on CDs by Gastr del Sol, Arthur Russell, and Swiss band Child Abuse.

Oehlen was Professor of Painting at the Kunstakademie Düsseldorf from 2000 to 2009.

Oehlen is the brother of fellow artist Markus Oehlen, and their father is also an artist. He lives with his wife, Esther Freund, and their three children in a village near Bühler.

In 2013 ArtDaily described Oehlen as "one of the most influential, but also one of the most controversial of contemporary painters". His paintings are also frequently compared with David Salle's. However his work has not been met with universal approval. Philippe Dagen, writing in Le Monde about Oehlen's 2011 exhibition in Nîmes, concluded that he was "of only limited importance. With about 30 canvases he reveals his system with absolute, but unfortunately appalling, clarity." His paintings were devoid of "any form of expression or psychic density". His 2007 painting, Loa, is now part of the UK's Tate Collection.