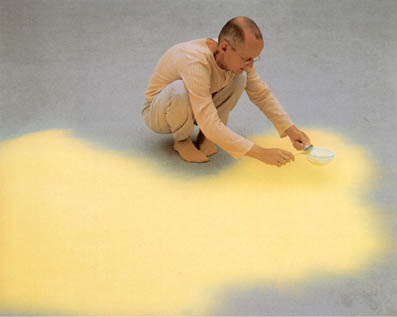 Wolfgang Laib (born 25 March 1950) is a German conceptual artist working predominantly with natural materials. He received the Praemium Imperiale in 2015.

Wolfgang Laib studied medicine in the early 1970s in Tübingen. After completing his dissertation on the hygiene of drinking water, he abandoned the profession to focus his interests in art, foreign cultures and Eastern philosophies such as Zen Buddhism and Taoism. He felt that his studies of medicine and the natural sciences were "too narrow," focusing on the body without concern for the spiritual.

Laib's work is challenging to classify. It may be grouped with Land Art or Process Art, and he shows influences of Minimalism. Informed by the purity and simplicity of Eastern philosophies, he employs natural materials, most notably milk, pollen, beeswax, rice and marble. His works are more complex than being just about nature and the natural world. They involve ritual, repetition, process, and a demand for contemplation.

He made the first of his milkstones in 1975. They consist of a rectangular piece of polished white marble. The top surface of which is sanded to create a slight and almost unnoticeable depression. Laib then fills this depression with milk, creating the illusion of a solid object. While the artist makes the initial pour, it is the responsibility of the gallery, museum, or collector to empty, clean, and refill the marble on a daily basis while the work is on display.

Laib is most well known for his use of large quantities of intense, yellow pollen. A slow and deliberate process, the artist collects the pollen from around his home in southern Germany during the spring and summer months. Working with the natural sequence of the seasons, he harvests the pollen on each tree or flower when it is in bloom, beginning with hazelnut, moving on to dandelion and other flowers, and finally ending with pine. Each type of pollen is unique in color and size. Laib exhibits the pollen in a variety of ways, most famously sifted on a stone or concrete floor, creating a field of brilliantly hued pollen. Final sizes are determined by the abundance of the pollen itself; with pine being more plentiful, therefore creating larger sifted areas. The pollen is also exhibited in glass jars or small piles. In addition, the pollen is sold to collectors and institutions in glass jars, without any stipulations as to how it should be exhibited. For Laib, the pollen is the artwork, not the process of collecting it or presenting it sifted on the floor or in jars.

He also makes extensive use of rice and beeswax. Sometimes intermixed with his use of pollen, the artist routinely places piles of rice in rows and columns within a gallery space. A 2011 installation, Unlimited Ocean, for the School of The Art Institute of Chicago consisted of more than 30,000 piles of rice and pollen, one of his largest installations to date. The rice pieces are often accompanied with brass plates or metal cones, such as his piece entitled The Rice Meals. Or as rice houses, in which rice is contained within or surrounding wax, metal, or sculpted marble and stone.