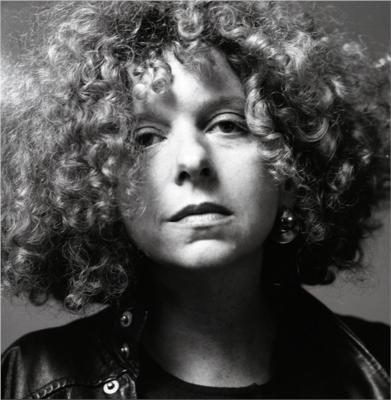 Barbara Kruger (born January 26, 1945) is an American conceptual artist and collagist. Most of her work consists of black-and-white photographs, overlaid with declarative captions, stated in white-on-red Futura Bold Oblique or Helvetica Ultra Condensed text. The phrases in her works often include pronouns such as "you", "your", "I", "we", and "they", addressing cultural constructions of power, identity, and sexuality. Kruger currently lives and works in New York and Los Angeles.

Kruger was born an only child into a lower-middle-class family in Newark, New Jersey. Her father worked as a chemical technician for Shell Oil and her mother was a legal secretary. She graduated from Weequahic High School. She attended Syracuse University, but left after one year due to the death of her father. After spending a year at Syracuse University, in 1965, she went on to pursue a semester at Parson's school of Design in New York. Over the next ten years, Kruger established herself whilst pursuing graphic design for magazines, freelance picture editing, as well as designing book jackets. By the later 1960s, Kruger gained interest in poetry, and began attending poetry readings and writings. Kruger studied art and design with Diane Arbus and Marvin Israel at Parsons School of Design in New York. Kruger soon obtained a design job at Condé Nast Publications. There after, Kruger was awarded the head designer for that following year. She initially worked as a designer at Mademoiselle and later moved on to work part-time as a picture editor at House and Garden, Aperture, and other publications. She also wrote film, television, and music columns for Artforum and Real Life Magazine at the suggestion of her friend Ingrid Sischy.

Kruger's earliest works date back to 1969. These works were large wall hangings made out of different materials such as yarn, beads, sequins, feathers and ribbons. These pieces represented the feminist recuperation of craft during this period. Kruger crocheted, sewed and painted bright-hued and erotically suggestive objects, some of which were included by curator Marcia Tucker in the 1973 Whitney Biennial. They were inspired by Magdalena Abakanowicz’s show at the Museum of Modern Art. Although some of these works were included in the Whitney Biennial, Kruger became detached and unsatisfied with her working output. In 1976 she took a break from making what had become more abstract works, feeling that her work had become meaningless and mindless. She then moved to Berkeley, California where she taught at the University of California and became inspired by the writings of Walter Benjamin and Roland Barthes. In 1977 she returned to artmaking, working with her own architectural photographs and publishing an artist's book, Picture/Readings, in 1979. She was inspired to photograph architecture from her family "looking at family homes [they] could never afford."

At the beginning of her art career, she was intimidated to enter New York galleries due to the art scene which was an atmosphere that, to her, did not welcome “particularly independent, non-masochistic women.” However, she received early support for her projects from groups such as the Public Art Fund that encouraged her to continue art making. She switched to her modern practice of collage in the early 80's.