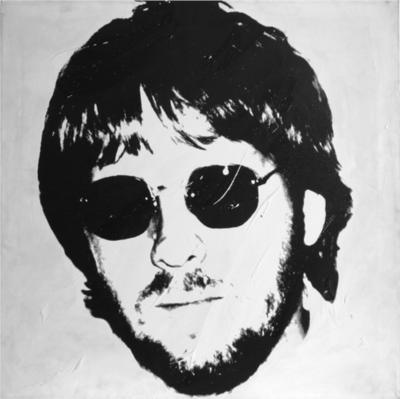 Joseph Kosuth (/kəˈsuːt, -ˈsuːθ/; born January 31, 1945), an American conceptual artist, lives in New York and London, after having resided in various cities in Europe, including Ghent and Rome.

Born in Toledo, Ohio, Kosuth had an American mother and a Hungarian father. (A relative, Lajos Kossuth, achieved notability for his role in the Hungarian Revolution of 1848.) Joseph Kosuth attended the Toledo Museum School of Design from 1955 to 1962 and studied privately under the Belgian painter Line Bloom Draper. In 1963 Kosuth enrolled at the Cleveland Institute of Art on a scholarship. He spent the following year in Paris and traveled throughout Europe and North Africa. He moved to New York in 1965 and attended the School of Visual Arts there until 1967. From 1971 he studied anthropology and philosophy with Stanley Diamond and Bob Scholte at the New School for Social Research, New York.

At the School of Visual Arts he made a significant impact while technically a student, influencing fellow students as well as more traditional teachers there at the time such as Mel Bochner. As Kosuth’s reputation grew, he was removed from the student body and given a position as a teacher, by Silas Rhodes the founder and President of the school, in 1967. This caused a near revolt of the faculty, as he had been a disruptive presence in the opinion of many of the instructors, several who had unhappily faced his questioning of basic presumptions. His elevation to a teacher was also a result of Kosuth’s outside activities, which included the founding of the Museum of Normal Art (giving the first exposure to artists such as Robert Ryman, On Kawara, Hanne Darboven, among others) along with proselytizing and organizing artists in a direction which was later identified as the conceptual art movement. Through his art, writing and organizing, he emphasized his interest in the dialectical process of idea formation in relation to language and context. He introduced the notion that art, as he put it, “was not a question of forms and colors but one of the production of meaning.” His writing began a re-reading of modernism, initiating a major re-evaluation of the importance of Marcel Duchamp and signaling the shift into what we now identify, in art, as post-modernism. His analysis had a major impact on his practice as an artist and, soon after, on that of others. During this period he also maintained his academic interests. His position on the Faculty, Department of Fine Art, The School of Visual Arts, New York City continued until 1985. He since been Professor at the Hochschule für Bildende Künste, Hamburg, 1988–90; and at the Staatliche Akademie der Bildende Künste, Stuttgart, 1991-1997. Currently he is Professor at the Kunstakademie Munich and at the Istituto Universitario di Architettura, Faculty of Design and Art, in Venice. He has been invited as a visiting professor and guest lecturer at various universities and institutions for nearly thirty years, some of which include: Yale University; Cornell University; New York University; Duke University; UCLA; Cal Arts; Cooper Union; Pratt Institute; The Museum of Modern Art, New York; Art Institute of Chicago; Royal Academy, Copenhagen; Ashmoleon Museum, Oxford University; University of Rome; Berlin Kunstakademie; Royal College of Art, London; Glasgow School of Art; The Hayward Gallery, London; The Sorbonne, Paris; The Sigmund Freud Museum, Vienna.