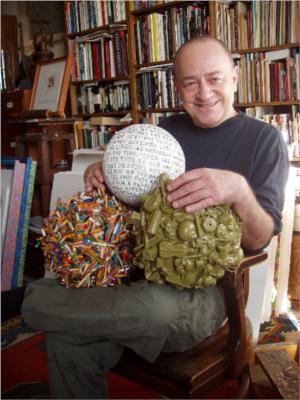 Before Benĕs attended Pratt Institute, he lived with his grandparents in Brooklyn, New York. As a teenager he made the U.S. Olympic speed skating team, while smoking a pack of cigarettes a day. It became clear around 17 years old that Barton had a flair for the contradictory, and the romantic. He would often walk around the city bare foot saying “I thought it was romantic to be a pig”. Around this time in his life Benĕs would sneak out and go to a mob-run gay bar named New Colony. While spending time there he was asked to complete an installation for customers to view. After being hired for his first piece he was given a job designing window installations for New Colony. While working for New Colony he met a man named Howard Meyer.

Howard was a . Benĕs and Howard soon moved in with each other and began their careers from home. Not soon after in 1969 Barton was contracted and put on his first exhibit “Leather and Lace”, a show involving him strapped naked to a padded leather table. He was then changed when he traveled to Africa to create his last painting. While in Africa his views of art evolved towards an obsession with Africa’s tribal culture, artifacts, and erotica.

Following Benĕs trip to Africa his work becam increasingly more contradictory during the 70s and 80s. His art revolved around clever artistic puns (i.e. a book nailed shut in protest of freedom of speech). During this time his aunt Evelyn that was interested in the stories of Barton’s life in New York would write letters. Fueled by Speed she would write letters ranging from 50 to 60 pages. Through which Barton would turn the letters in to small intricate books.

While Benĕs was using his Aunt as a prompt for his art, a hustler that was hired by Benĕs began an affair with his lover Howard. Aunt Evelyn who had begun writing to Bartons friends, also began writing to the hustler Barton’s lover Howard was having the affair with. During the affair the hustler responded to Aunt Evelyn informing her of what her letters were being used for. This led to a falling out between Benĕs and his Aunt, she threatened to sue him then immediately stopped all communication with her Nephew. Later in life Benĕs attempted to reconnect with his aunt but his efforts were not successful.

In 1986 Howard Meyer was diagnosed with Kaposi’s Sarcoma and Benĕs with AIDS. The next few years after he was diagnosed, included the passing of a number of close friends. Three years afterwards Howard Meyers passed from his illness. This was the breaking point for Benĕs he watched his lover pass. Barton says that “When he died—it’s crazy but true—I saw the energy leave his body,”, “And I got on top of him to grab the energy.”. For the first time since Benĕs was diagnosed with AIDS he had an artistic impulse. Turning the emotions he was experiencing into an artistic experience. Benĕs would begin to use his friends and their memories as mementos in his pieces. Beněs made "museums" somewhat in the style of Joseph Cornell, which incorporate into shadow boxes bits and pieces that reveal the myths and ironies of life. The fragments in Beneš's museums often involve famous people and events, as do the sixteen collaged bits in this print, from a piece of Elizabeth Taylor's shoe to a crumb from the wedding cake of the Prince of Wales.