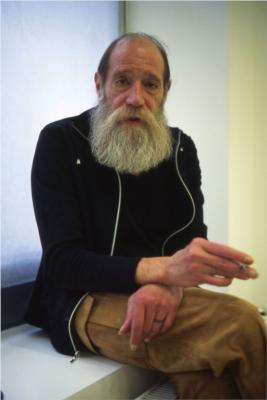 Lawrence Weiner (born February 10, 1942) is one of the central figures in the formation of conceptual art in the 1960s. His work often takes the form of typographic texts.

Weiner was born in the Bronx, New York, the son of a candy-store owner. After graduating from Stuyvesant High School at 16, he had a variety of jobs—he worked on an oil tanker, on docks, and unloading railroad cars. After studying at Hunter College for less than a year, he traveled throughout North America before returning to New York.

Weiner began his career as an artist as a very young man at the height of Abstract Expressionism. His debut public work/exhibition was at the age of 19, with what he called Cratering Piece. An action piece, the work consisted of explosives set to ignite simultaneously in the four corners of a field in Marin County, California. That work, as Weiner later developed his practice as a painter, became an epiphany for the turning point in his career. His work in the early 1960s included six years of making explosions in the landscape of California to create craters as individual sculptures. He is also known during his early work for creating gestures described in simple statements leading to the ambiguity of whether the artwork was the gesture or the statement describing the gesture: e.g."Two minutes of spray paint directly on the floor.." or " A 36" x 36" removal of lathing or support wall..." (both 1968). In 1968, when Sol LeWitt came up with his Paragraphs on Conceptual Art, Weiner formulated his "Declaration of Intent" (1968):

Weiner created his first book Statements in 1968, a small 64-page paperback with texts describing projects. Published by The Louis Kellner Foundation and Seth Siegelaub, "Statements" is considered one of the seminal conceptual artist's books of the era. He was a contributor to the famous Xeroxbook also published by Seth Siegelaub in 1968. Weiner's composed texts describe process, structure, and material, and though Weiner 's work is almost exclusively language-based, he regards his practice as sculpture, citing the elements described in the texts as his materials.

An important aspect of audience participation in Weiner’s work is site-specificity. In SOME LIMESTONE SOME SANDSTONE ENCLOSED FOR SOME REASON (1993) he recast the iron weighbridge of the Dean Clough carpet factory, incorporating the words of the title as an embossing inscription.

Since the early 1970s, wall installations have been Weiner's primary medium, and he has shown at the Leo Castelli gallery. Nevertheless, Weiner works in a wide variety of media, including video, film, books, sound art using audio tape, sculpture, performance art, installation art, and graphic art. In 2007, he participated at the symposium “Personal Structures Time-Space-Existence” a project which was initiated by the artist Rene Rietmeyer. In 2008 an excerpt from his opera with composer Peter Gordon – The Society Architect Ponders the Golden Gate Bridge – was issued on the compilation album Crosstalk: American Speech Music (Bridge Records) produced by Mendi + Keith Obadike. In 2009 he participated in the art project Find Me, by Gema Alava, in company of artists Robert Ryman, Merrill Wagner and Paul Kos.