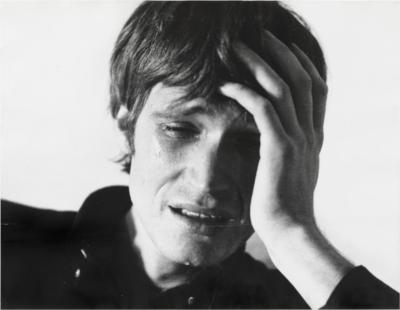 Bastiaan Johan Christiaan "Bas Jan" Ader (born 19 April 1942 – disappeared 1975) was a Dutch conceptual artist, performance artist, photographer and filmmaker. He had lived in Los Angeles, California for the last twelve years of his life. His work was in many instances presented as photographs and film of his performances. He made performative installations, including Please Don't Leave Me (1969).

Ader was lost at sea in 1975, attempting to cross the Atlantic Ocean from the US to England sailing in the smallest boat with which the voyage has ever been attempted. His deserted vessel was found off the coast of Ireland on 18 April 1976, offering few clues as to his fate.

Born on 19 April 1942, Ader grew up in Drieborg, a small village in the Dutch province of Groningen. His father, Bastiaan Jan Ader and his mother Johanna Adriana Ader-Appels were both Calvinist ministers. His father was executed in 1944 by the Nazis for his large scale endeavors to help Jewish compatriots to escape the Holocaust.

During adolescence, Ader took art classes at the Gerrit Rietveld Academy in Amsterdam, and later in the United States during a study abroad program. Ader graduated from the Otis College of Art and Design in 1965 with a BFA, and from the Claremont Graduate University in 1967. After graduating, he taught at various institutions, including Mt. San Antonio College, Immaculate Heart College, and the University of California, Irvine.

Ader created a handful of photographs as well as several short black-and-white films in which he is the sole performer.

One of his most famous works, I'm too sad to tell you, consists of a 3-minute silent black-and-white movie of him crying, several photographs (long hair and short hair versions) and a post card mailed to his friends with the inscription "I'm too sad to tell you". Other films include him sitting on a chair on a pitched roof until he falls, one where he is hanging on a branch until his grip gives out and he falls into a stream, and a film in which he rides his bike into a canal.

In 1969–70 he anonymously published the satirical conceptual art magazine Landslide with his friend William Leavitt. The magazine featured “interviews” with nonexistent artists, such as “Brian Shitart”, and pranks such as “expandable sculpture” which was five packing peanuts in an envelope. Although satirical of conceptual art, the magazine itself is considered a work of conceptual art.

In 1973 he made the work 'In search of the miraculous (One night in Los Angeles)', a series of photographs showing a lonely figure wandering through the night in L.A, searching everywhere with a torchlight. It was the first part of a triptych. The second part would be the record of his Atlantic crossing (see below), the third part a similar night time search somewhere in the Netherlands, again to be recorded in a series of photographs. He had arranged for a choir to sing sea shanties at a gallery in Los Angeles before his departure from Cape Cod. A similar performance was planned upon his arrival in a museum in Groningen, Netherlands. Due to his loss at sea, the triptych was never completed. The title “In Search of the Miraculous” was a reference to P.D. Ouspensky's mystical book In Search of the Miraculous.