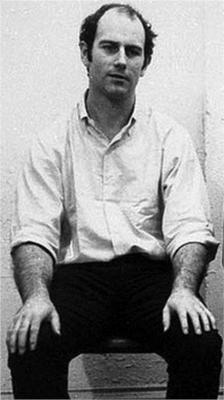 Ian Burn (29 December 1939 – 29 September 1993) was an influential Australian conceptual artist. He was a notable member of the Art and Language group that flourished in the 1970s. Ian Burn was also an art writer, curator, and scholar.

Ian Burn was born on 29 December 1939 in Geelong, Australia.

Burn studied art at the National School Of Art in Melbourne. He became affiliated with the Art and Language collective when he moved to London in 1964 and remained a part of the group when he moved to New York City in 1967. In 1977, Burn returned to Australia to teach at Sydney University. Ian Burn drowned on 29 September 1993 while swimming in rough seas at Bawley Point, New South Wales.

"Xerox Book", 1968 - 100 iterative copies of a blank sheet of white paper on a Xerox 720, arranged in a book in the order they were created. The final pages in the series of copies were filled with black forms that had arisen slowly from the 'error' of the machine.