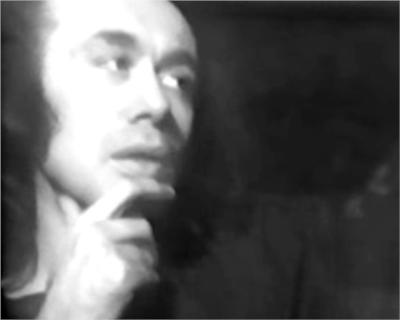 Vito Acconci (January 24, 1940 – April 27, 2017) was an influential American performance, video and installation artist, whose diverse practice eventually included sculpture, architectural design, and landscape design. His foundational performance and video art was characterized by "existential unease," exhibitionism, discomfort, transgression and provocation, as well as wit and audacity, and often involved crossing boundaries such as public–private, consensual–nonconsensual, and real world–art world. His work is considered to have influenced artists including Laurie Anderson, Karen Finley, Bruce Nauman, and Tracey Emin, among others. Acconci was initially interested in radical poetry, but by the late 1960s, he began creating Situationist-influenced performances in the street or for small audiences that explored the body and public space. Two of his most famous pieces were Following Piece (1969), in which he selected random passersby on New York City streets and followed them for as long as he was able, and Seedbed (1972), in which he claimed that he masturbated while under a temporary floor at the Sonnabend Gallery, as visitors walked above and heard him speaking.

In the late-1970s, he turned to sculpture, architecture and design, greatly increasing the scale of his work, if not his art world profile. Over the next two decades he developed public artworks and parks, airport rest areas, artificial islands and other architectural projects that frequently embraced participation, change and playfulness. Notable works of this period include: Personal Island, designed for Zwolle, the Netherlands (1994); Walkways Through the Wall at the Wisconsin Center, in Milwaukee, WI (1998); and Murinsel, for Graz, Austria (2003). Retrospectives of Acconci's work have been organized by the Stedelijk Museum in Amsterdam (1978) and the Museum of Contemporary Art, Chicago (1980), and his work is in numerous public collections, including those of the Museum of Modern Art and Whitney Museum of American Art. He has been recognized with fellowships from the National Endowment for the Arts (1976, 1980, 1983, 1993), John Simon Guggenheim Memorial Foundation (1979), and American Academy in Rome (1986). In addition to his art and design work, Acconci taught at many higher learning institutions. Acconci died on April 28, 2017 in Manhattan at age 77.

Born Vito Hannibal Acconci in the Bronx, New York in 1940, Acconci attended a Roman Catholic elementary school, high school (Regis High School in New York City), and college. He received a BA in literature from the College of the Holy Cross in 1962 and an MFA in literature and poetry from the University of Iowa. He noted: "There wasn't a woman in my classroom between kindergarten and graduate school."

Acconci began his career as a poet, editing and self-publishing the poetry magazine 0 TO 9 with Bernadette Mayer in the late 1960s. Produced in quantities of 100 to 350 copies per issue on a mimeograph machine, the magazine mixed contributions by both poets and artists.

In the late 1960s, Acconci transformed himself into a performance and video artist using his own body as a subject for photography, film, video, and performance. Most of his early work incorporated subversive social comment. His performance and video work was marked heavily by confrontation and Situationism. In the mid-1970s, Acconci expanded his métier into the world of audio/visual installations.