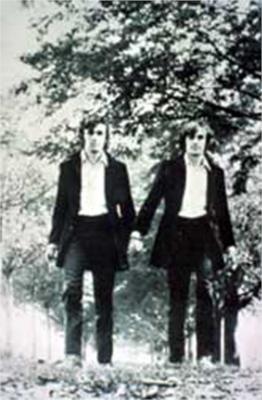 Alighiero Fabrizio Boetti known as Alighiero e Boetti (16 December 1940 – 24 February 1994) was an Italian conceptual artist, considered to be a member of the art movement Arte Povera.

Boetti is most famous for a series of embroidered maps of the world, Mappa, created between 1971 and his death in 1994. Boetti's work was typified by his notion of 'twinning', leading him to add 'e' (and) between his names, 'stimulating a dialectic exchange between these two selves'.

Alighiero Boetti was born in Turin, to Corrado Boetti, a lawyer, and Adelina Marchisio, a violinist. Boetti abandoned his studies at the business school of the University of Turin to work as an artist. Already in his early years, he had profound and wide-ranging theoretical interests and studied works on such diverse topics as philosophy, alchemy and esoterics. Among the preferred authors of his youth were the German writer Hermann Hesse and the Swiss-German painter and Bauhaus teacher Paul Klee. Boetti also had a continuing interest in mathematics and music.

At seventeen, Boetti discovered the works of the German painter Wols and the cut canvases of Argentine-Italian artist Lucio Fontana. Boetti's own works of his late teen years, however, are oil paintings somewhat reminiscent of the Russian painter Nicolas de Staël. At age twenty, Boetti moved to Paris to study engraving. In 1962, while in France he met art critic and writer Annemarie Sauzeau, whom he was to marry in 1964 and with whom he had two children, Matteo (1967) and Agata (1972). Working in his hometown of Turin in the early 1960s amidst a close community of artists that included Luciano Fabro, Mario Merz, Giulio Paolini, and Michelangelo Pistoletto, among others, Boetti established himself as one of the leading artists of the Arte Povera movement. From 1974 to 1976, he travelled to Guatemala, Ethiopia, Sudan. Boetti was passionate about non-western cultures, particularly of central and southern Asia, and travelled to Afghanistan and Pakistan numerous times in the 1970s and 1980s, although Afghanistan became inaccessible to him following the Soviet invasion in 1979. In 1975, he went back to New York.

Active as an artist from the early 1960s to his premature death in 1994, Boetti developed a significant body of diverse works that were often both poetic and pleasing to the eye while at the same time steeped in his diverse theoretical interests and influenced by his extensive travels.

From 1963 to 1965, Boetti began to create works out of then unusual materials such as plaster, masonite, plexiglass, light fixtures and other industrial materials. His first solo show was in 1967, at the Turin gallery of Christian Stein. Later that year participated in an exhibition at Galleria La Bertesca in the Italian city of Genoa, with a group of other Italian artists that referred to their works as Arte Povera, or poor art, a term subsequently widely propagated by Italian art critic Germano Celant.