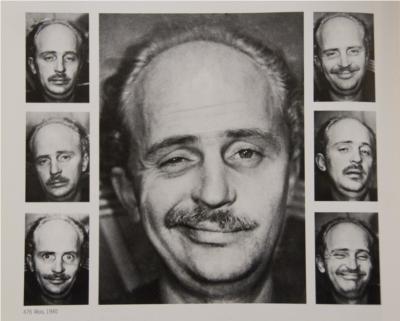 Wols was the pseudonym of Alfred Otto Wolfgang Schulze (27 May 1913, Berlin – 1 September 1951, Paris), a German painter and photographer predominantly active in France. Though broadly unrecognized in his lifetime, he is considered a pioneer of lyrical abstraction, one of the most influential artists of the Tachisme movement. He is the author of a book on art theory entitled Aphorismes de Wols.

Alfred Otto Wolfgang Schulze was born in Berlin in 1913 into a wealthy family; his father was a high-ranking civil servant and patron of the arts who maintained friendships with many prominent artists of the period, including Otto Dix. In 1919, the family moved to Dresden, where consequently he found his love for art in 1927. In 1924, Schulze was given a still camera, an event that, along with the death of his father in 1929, became one of the defining moments of his life. In 1930 he began to pursue an apprenticeship with his camera at the Reiman-Schule, the Berlin school of applied art. He was a multifaceted man who was capable of teaching German, painting, and capturing photographs of portrait landscape.

After abandoning school, Schulze pursued several interests, including ethnography before moving to Paris in 1932 on the advice of László Moholy-Nagy. After visiting Germany in 1933, he decided not to return, instead traveling to Barcelona, Majorca, and Ibiza, where he worked odd jobs, including a stint as a taxicab driver and a German tutor.

In 1936, he received official permission to live in Paris with the help of Fernand Léger; as an army deserter, Schulze had to report to the Paris police on a monthly basis. Beginning in 1937, he actively worked on his photographs, which were shown in many of Paris's most prestigious galleries. He befriended luminaries of the period, including Max Ernst and Jacques Prévert. As a German national, Schulze (like Ernst) was interned at the start of World War II, but he managed to escape and hide in Cassis near Marseilles, where he passed the time drawing and painting in watercolor. In 1942 he fled from the Germans to the safety of Montelimar.

He spent most of the war trying to emigrate to the United States, an unsuccessful and costly enterprise that may have driven him to alcoholism. Upon his return to Paris, after the hype from the war had died down, he had his first exhibition of watercolors in December 1945 at the Galerie René Drouin, where despite the lack of commercial success he made an impression on the circle of intellectuals around the gallery. These included Jean Paulhan, Francis Ponge, Georges Limbour and André Malraux. The small works were displayed in light boxes. A second exhibition in the same gallery two years later saw greater recognition. His paintings represented a rejection of figuration and abstraction, and a projection into a metaphysical plane.

In the years following the war, Schulze concentrated on painting and etching. His health declined severely towards the end of the 1940s; in 1951 he died of food poisoning at the Hotel Montalembert in Paris, after releasing himself from hospital against medical advice. After his death his works were shown at the Kassel documenta (1955), documenta II (1959) and documenta III (1964).